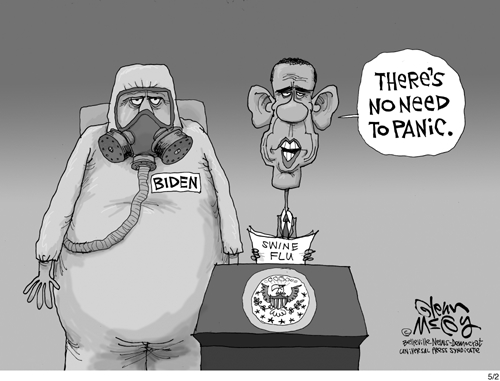 Since I’ve been asked about my take on the swine flu situation a few times in the comments section and numerous times by other people I know, I figured I would post on the subject. Re the above cartoon: I agree with the President.

I don’t think the situation is nearly as bad as many people – including our esteemed Vice President – seem to think it is. Whenever I hear reports of panic like those we’ve been bombarded with over the past week, I always think of what H.L. Mencken had to say in such circumstances:

The whole aim of practical politics is to keep the populace alarmed (and hence clamorous to be led to safety) by menacing it with an endless series of hobgoblins, all of them imaginary.

In this case, I don’t think it is the government that is spreading the panic – Biden’s gaffs notwithstanding – instead I believe it is the press. The same Mencken quote could easily apply to the media.

You didn’t hear about Biden’s gaff? Well, the spinmeisters got to it pretty quickly. 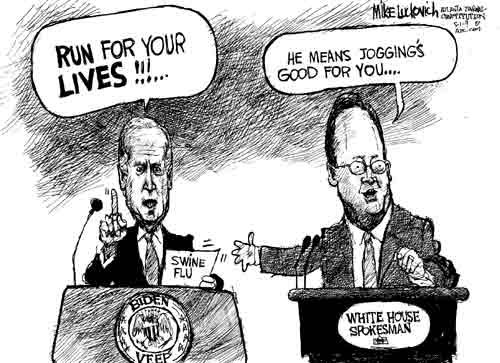 If, instead of running for their lives, people are running to the internet, glued to CNN, and the other 24/7 news channels and reading every newspaper and news magazine that comes along, the press is extremely happy. It’s what they live for. When they get a hot story like this one, they are loath to let it go until they’ve milked it for maximum exposure. And they are milking this one for all it’s worth. But remember, the media did this same thing a few years ago and inspired the same kind of panic over SARS, which ended up not amounting to much in terms of a real pandemic.

Based on the recent cases, this influenza doesn’t appear to be all that virulent. In fact, it looks to be much less virulent than the standard old garden-variety flu that is common in the winter.

This influenza virus, like all influenza viruses, can mutate via a process called antigenic drift, which can make it either more or less virulent. When we get the flu, we develop antibodies to the particular strain of influenza virus that infected us. As this virus mutates a little, our antibodies can continue to beat it back because it is similar enough to the strain we got that our immune system recognizes it. After a number of years of antigenic drift, the virus will have changed enough that our immune system no longer recognizes it, and we get infected again. Measles, mumps and chicken pox are common viruses that don’t go through antigenic drift, so once we have them, we pretty much have immunity against then forever, but not with the flu. Which is why once you get it, you don’t get it again for a number of years, then you come down with it once again.
Based on my own experience both being infected with the flu and taking care of patients infected with it has led me to believe that the influenza virus is becoming less virulent in general over time. Why? Natural selection.

Remember, natural selection works by spontaneous mutations that confer a survival advantage to the organism that carries them. Such an organism has a better chance of surviving and passing the mutation along to its offspring. With this in mind, consider the influenza virus. It lives in humans, birds, pigs, etc. It typically spreads via droplets disseminated by sneezing and coughing or close physical contact. Think about what happens if a virus is extremely virulent. The person (or animal) infected with it gets extremely ill, stays put, and maybe even dies. This behavior reduces the chance of the virus’ spreading. If however, the virus mutates to a much less virulent form, people who are stricken with it continue to work and socialize and don’t die. The virus lives longer in the host and has a much greater chance of being spread, which is better for the virus. So a lesser virulence confers a survival advantage to the virus, which is why I think the flu has become less and less problematic over time.

What can we do about this strain?

First, I don’t think it will amount to much because of the season. I’m a firm believer in the notion that reduced vitamin D levels in the winter predispose us to the flu and other viral infections at that time. Right now, it is late spring and nice and sunny with longer days. People are getting out more and building their vitamin D. For this reason alone, I don’t believe we’re going to see a pandemic.

It takes about 12 weeks to grow the virus in culture and use it to develop a vaccine, which is why the CDC can’t just crank out vaccine on the spur of the moment when a virus such as this one shows its face. And even if a vaccine could be cranked out, it takes a while after the vaccination to develop the immunity, so it wouldn’t help immediately anyway. Since there will be no vaccine, we need to turn to other techniques to protect ourselves. How can we do that? By doing all the things we need to do to bolster our immune systems.

This swine flu is a type A influenza, which is a type that can usually be warded off prophylactically with amantidine (Symmetrel), an inexpensive drug that is readily available. But from my reading, it looks like this particular strain of influenza A is resistant to that drug. There are a couple of other drugs that are effective in the treatment of this flu – Tamiflu and Relenza – but I wouldn’t use them as a prophylactic. Keep them in reserve in the unlikely event that you should actually contract this flu. MD and I have gotten calls from friends and family all over the place wanting us to call them in prescriptions for these drugs, but we have refused because we don’t want to deplete supplies (which are limited) for those who actually get the flu.

As far as I’m concerned, the single best thing you can do is to make sure your vitamin D levels are where they are supposed to be. On days that I’m not in the sun, I always take a 5,000 IU vitamin D3 capsule. If I feel like I’m coming down with something or if I’m going on a long flight, I’ll take a 50,000 IU capsule.

In addition to the vitamin D, the other things you can do are as follows:

Get plenty of sleep. Sleep is a great immune enhancer. Remember all the times you’ve shorted yourself sleep and ended up catching a cold. Get your rest. If you have trouble falling asleep, try some sublingual melatonin. It’s available at any health food store. Put 1 or 2 mg under your tongue when it’s lights out. Don’t use the melatonin unless and until you’ve turned the lights out and are ready to sleep.

Wash your hands frequently and keep them away from your nose and eyes. This is especially good advice when you are traveling or even just out and about. Someone with the flu (or other virus) sneezes into his/her hand, touches a door handle, you grab the same door handle, then rub (or pick at) your nose, and Bingo! you’re inoculated. So I repeat: wash your hands and keep them away from your nose. Hand sanitizers help. And, as if I need to tell anyone this, try to avoid having someone sneeze or cough in your face.

I would avoid kissing pigs and strangers. Wait until this scare recedes into your rear-view mirror before you follow the lead of this youngster. 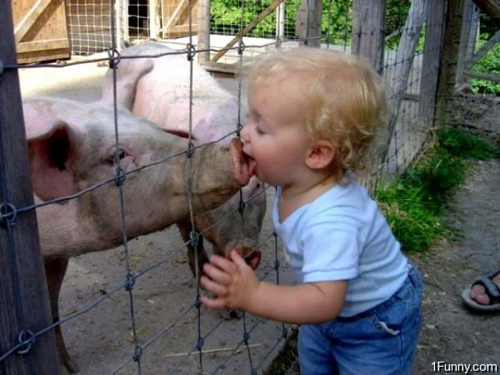 Follow the above recommendations, and I think you’ll do all you can to minimize your chances for infection.

If you do get the flu, have your doctor give you a prescription for one of the two drugs mentioned above.

But I doubt you will get infected. And I suspect this whole thing will blow over in fairly short order.