When I took my parasitology course in medical school I was exposed for the first time to all the loathsome diseases that are unheard of here but are a part of daily life in other parts of the world. Here people go nuts and rush to the emergency room if they find pin worms in their kid’s stool; there having a Loa loa worm creep across your eye is a common occurrence and only a minor bother.

I was fascinated with my study of liver flukes, roundworms, tapeworms and all the other parasites afflicting primarily those in tropical areas. The most vile yet amazing of these creatures was to me Dracunculus medinensis, the Guinea worm. This parasite causes untold misery to those it afflicts, and is now, as this BBC piece relates, on its way to extinction. For people living in areas the Guinea worm infests, I’m sure this is wonderful news.

What the BBC neglected to mention is that the eradication of the Guinea worm has been effected in large measure by none other than our former president, Jimmy Carter. Carter, in my opinion, wasn’t much of a president, but he has been a terrific ex-president when he avoids politics and sticks to humanitarian issues. This Carter Center he and his wife founded has been instrumental in educating people in areas where the Guinea worm is common to take the needed steps to intervene in the parasite’s life cycle and disrupt its ability to reproduce. The BBC reports:

A tropical worm disease that has plagued people since ancient times could be eradicated in less than two years, experts predict.

To have this worm beaten back to only the point at which it affects only 25,000 people is a stupendous achievement. I broke out my old med school parasitology text, which was published in 1975, and found that at that time there were an estimated 48 million people infected with the Guinea worm. From 48 million to 25,000 in about thirty years is a real triumph.

The thing that intrigued me the most about the Guinea worm was its inbred ability to do what it needed to do to reproduce itself. As anyone who has read much of my writing knows, I’m driven by the idea that the best diet for man today is the one he cut his evolutionary teeth on. The forces of natural selection mold our genome in ways that we are barely starting to even think about. Our genome not only responds to the foods we eat by turning on or off particular genes, it affects our thinking and emotions as well. Nowhere is this genomic force more well demonstrated than in the Guinea worm. 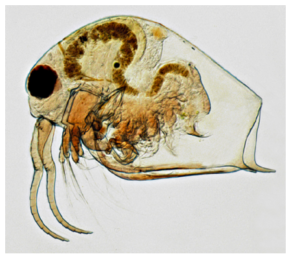 Dracunculus medineses is a simple creature in terms of biological complexity with a less than primitive brain. Yet it is driven by incomprehensible forces to do what it
needs to do to propagate. It starts its life as a larva wriggling in the water where it is eaten by a water flea. No water flea meal ingestion — the cycle ends. Once in the flea the larva coils itself tightly and becomes inactive. If the flea dies, so does the larva. But if the flea is consumed by a person drinking the water, the larva gets its next big break. The stomach acid dissolves the flea, but not the larva, which makes its way to the small intestine, then through the wall of the small intestine into the body cavity. Over the next year the female finds and mates with a male Guinea worm larva. The male dies and is absorbed into the body of the female. The impregnated female goes through a growth spurt that ends up with her being an adult worm from two or three feet long and about as big around as a piece of spaghetti. Here’s where it gets interesting.

Up to this point the human host of this worm has no symptoms and hasn’t a clue as to what’s about to happen. The pregnant female begins to migrate toward the victim’s feet. How does it know which way that is? It’s a mystery. Once the worm reaches its destination at the under surface of the skin of the foot or ankle it releases a toxic liquid that causes a blister on the surface of the skin. The blister and the toxic liquid that cause it are extremely painful causing an intense, fiery, burning sensation. The person experiencing this torture is driven to submerge the affected foot into water to help reduce the pain. As soon as the foot goes into the water, the female Guinea worm, with uterus poked out the top of the blister, releases thousands of new larva into the water and the cycle starts again.

Once the female has surfaced and released her larva, she can be seen. The age-old

method of treatment at this point is to wrap the emerging worm around a stick of matchstick diameter and slowly, very slowly, roll the worm around the stick. It takes several weeks to fully extract the worm. The extraction must be done with extreme care because if the worm breaks during the process a severe inflammatory reaction takes place causing disabling pain and, in some cases, even death.

The worst part of this ordeal is that if you’ve got one Guinea worm, you’ve probably got another ready to erupt at anytime.

By teaching people in Guinea worm infested areas to at least strain their drinking water to remove the water fleas, the life cycle is disrupted. The Carter Center is educating people to do that and to avoid standing in water when the blisters erupt. If the female can’t eject her larvae into the water, the life cycle also comes to a halt.

The take home message of this story is to be aware of urges and drives to eat. If the forces of nature can drive such a simple-brained, primitive creature as the Guinea worm to do all the things it needs to do to reproduce, imagine how strongly these forces work on us infinitely more complex creatures all the time. If a man with his foot on fire from an emerging worm can be trained to go against all his natural inclinations and not plunge his foot in the water, we can be trained not to succumb to our nature-driven urges to go face down in the carbs.

Now, the real reason I wrote this post: I have to expiate for my own sins. My wife bought a box of chocolate candies from a kid trying to raise money for something. She brought them home and put them in a drawer (why she didn’t just give the kid five bucks and say ‘keep the candy’ I don’t know). They’ve been in the same drawer, one in which I almost never look, for several months. Last night MD made ribs for dinner, which I ate along with a few slices of tomato. I felt full and content. Then for whatever reason, the knowledge that those candies were there began to prey on me. Why last night? why not three months ago or anytime in between? I don’t know. It must be one of those drives like the one that drives the Guinea worm to the feet of its victim instead of the hands.

To hold, as ’twere, the mirror up to nature.

Whatever the reason, I opened the box and threw five or six of those suckers back as fast as I could. A paragon of low-carb virtue I was not.

Of course, I felt like crap afterward. Not emotionally, but physically. God only knows how high my blood sugar went. I like to think I’m more complex than a Guinea worm, able to overcome and out think urges installed by my genome, but last night I wasn’t. And I have no one to blame but my genes…and my wife!