Disney Small World ride a casualty of the obesity epidemic 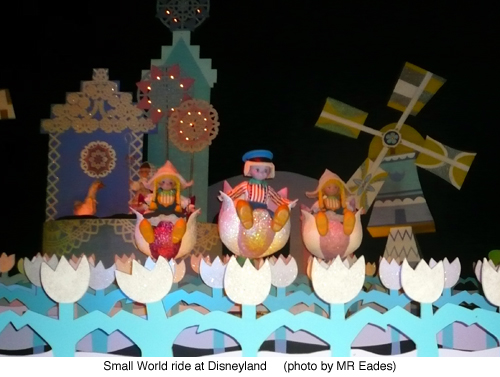 MD and I just spent a couple of days with the grandkids at Disneyland. They’re here visiting for a couple of weeks, so we decided to bite the bullet and take them on the front end and get it over with instead of waiting until the end, as we usually do, and dreading it the entire time. It was brutal but it is now over.

I loathe Disneyland and refer to it as the biggest people trap ever built by a mouse. Which isn’t an original, but I’ve been saying it for so long that I’ve forgotten where I heard it years ago.

This year I at least was able to avoid the Small World ride. Our 7-year-old grandson informed us that it was ‘lame.’ I couldn’t have agreed more. I wasn’t so lucky a couple of years ago, however. We took the kids then and did end up going on the Small World ride, which experience the grandkid remembered when he referred to the ride as being lame.

For those of you lucky enough to have escaped the Disneyland experience, the Small World ride is easily the most inane amusement park ride ever conceived by the mind of man. You get in these little fiberglass flat-bottomed boats and cruise through this serpentine canal that wends its way around tableaus of little dolls of various nationalities (as in photo above) doing their mechanical dances to what is easily the most nauseating piece of music ever written. Unlike most Disneyland rides that you wait an hour to get on and are then over in about 45 seconds, the Small World ride is interminable. It goes on and on and on. Which is, I suppose, its only virtue because at least it is dark and air conditioned, a welcome change from the heat radiating up from the vast concrete underpinnings of the park. (The downside is that you’ve been exposed to the nauseating song for so long that it has wedged itself into your brain and you can’t get it out for the rest of the day.)

When I last rode the ride, it had just reopened after having been closed for almost a year for renovations. I asked one of the attendants what had changed, hoping for an de-inane-ation of the ride. The guy told me it hadn’t changed at all; they had just made the boats a little bigger and deepened the channel. Then he told me it was because the guests of the park had become so much larger than when the ride went in in the 60s and were causing the boats to bottom out.

The park was so crowded and hot when we went two years ago that I kind of went brain dead. All I wanted to do was slog through and get it behind me. This time the weather was better and, thanks to the recession, the park wasn’t as crowded. And I wasn’t so miserable, so I had a chance to look around a little more.

If Disneyland is any indication, there is no question we’re in the midst of an obesity epidemic. I tried to make some kind of semi-accurate estimate by doing little statistical analyses when was waiting around for rides. It looked to me that about 40 percent of adults were out and out obese, some morbidly so. And I would estimate that of the folks who weren’t actually obese, at least 85 percent of them were overweight. A normal weight adult at Disneyland was a rarity. 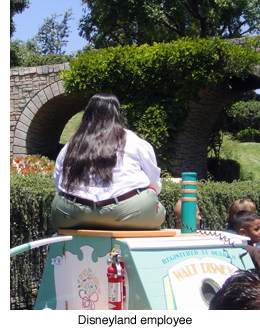 What really surprised me was the state of obesity of the Disneyland staff. When I was in college I got a job at Disneyland (which in part accounts for my loathing of the place). I was a conductor on the train that circumnavigates the park. It was one of the worst jobs I ever had. But it did have its perks. At that time, all the employees were college students or college dropouts who were the full time workers. In keeping with the Disney image at the time, just about all the young employees selected were clean cut and nice looking. As a consequence, the place was kind of a meat market. Employee parties were legendary. That part I enjoyed, but my enjoyment was somewhat tempered by the fact that I had a steady girlfriend at the time who also worked at Disneyland.

Now, the young employees are a reflection of the population in general. At least half of them are obese, some almost morbidly so. I don’t know if this represents the student body of the local college or what, but it certainly has changed over the past few decades.

Despite my kind of flippant tone in this post, I don’t find the large numbers of obese guests (as the Disneyland staff refers to the people paying to go there) and staff amusing in the slightest. I think it is tragic. As I’ve said many times before, we have all been the unwitting subjects of a long experiment, the hypothesis of which is that since fat is bad and carbs are good, we should all eat low-fat, high-carb diets. If so, says this hypothesis, obesity will go away. Well, it hasn’t. It has gotten much, much worse. And the sad, sad thing is that this hypothesis was never validated scientifically before we were all enrolled in the experiment. When I see dozens and dozens of young people looking like the one pictured above, it makes my blood boil. Most of the people who inflicted this nonsense on us are still around and still pushing the carbs and still blaming the fat in the diet. Tar and feathers spring to mind.

When I thought I was going to have to subject myself to the Small World again before my grandson got me out of it by not wanting to go himself, I remembered what the attendant had told me previously about the ride being renovated because of the increase in obesity. I wondered if it were an urban legend or if it were really true. When I got back to a computer, I checked it out.

There are a number of investigative reports on the idea, and the consensus seems to be that the renovation was due to the boats bottoming out due to the increased weight of the passengers. Based on what I saw, I suspect that’s the case because just taking the average weight gain over the last 40 years means the boats are carrying 200 extra pounds more than they were designed for…  Disney officials are staying mum, however.

During my own investigation on the issue, I ran across an interesting article on Snopes.com. A new twist has been added to many of the rides at Disneyland, especially the ones that hurtle you along in the dark. Cameras are placed in strategic locations and take photos as the ride comes through. After you get off, you can go see a photo of yourself and your entire boat or log or train car or whatever conveyance dropping over a precipice projected on a screen near the exit. Most people are pictured screaming and holding on for dear life.

One of the rides – Splash Mountain – has achieved some notoriety because it has become common for female riders to pull up (or down) their tops as they approach the cameras. This flashing has become so common that the ride has become known as Flash Mountain. All of the photos are looked at by park officials before being put up on the screens for all to see. Here is the Snopes link to the article – a little (very little, actually) navigating will get those with a prurient bent to a page of these photos. I, of course, had to look as part of my investigation for this blog post.

The Disney officials are good at weeding out these bawdy photos and they are very good at feeding the hordes of overweight people exactly what they want. Disneyland is carb heaven. That’s just about all you can find. There are sweetened cold drinks, a variety of ice cream products, cotton candy, gummy sweets, funnel cakes and other high-carb junk of every stripe. It is almost impossible to avoid carbs there. It can be done, but it is difficult and requires a lot of effort. The vast majority of the people I saw weren’t making the effort.

If I’m lucky, I’ll be able to avoid the Magic Kingdom for at least another couple of years. When I do get dragged there again, I’ll stumble along as I normally do, putting one tired foot in front of the other counting the hours until it’s over. But, admittedly, I will approach Splash Mountain with a little more exuberance than I have in the past.