I got an email first thing this morning from a South African journalist inquiring as to what I thought about it. Monday mornings are killers for me, so I thought I would jot off a quick response and be done with it. Forty-five minutes later I was still writing. So, I figured I would at least post what I wrote to her here so all could read it.

As seems to be typical, Dr. Ornish’s stance is argued using half truths, obfuscations and all the other slippery tricks in his playbook of deceit.  I don’t have time to go through the full thing, especially on a Monday morning when I have so many other obligations.

As per usual for him, he is relying on observational or epidemiological studies to try to imply causation, and as every decent scientist knows, they do no such thing.

Just to show how disingenuous he is, take a look at how he quotes the statistics in the USDA publication he links to in his editorial.

From the third paragraph of his article:

The message Ornish wants the reader to take away from this is that excess meat and fat consumption are driving the health problems we’re facing as a nation.  Nothing could be further from the truth.  But this is typical vintage Ornish: citing statistics and even giving the reference to find those statistics and assuming no one will bother to actually look them up.

Here is what the statistics really say in the USDA publication cited: 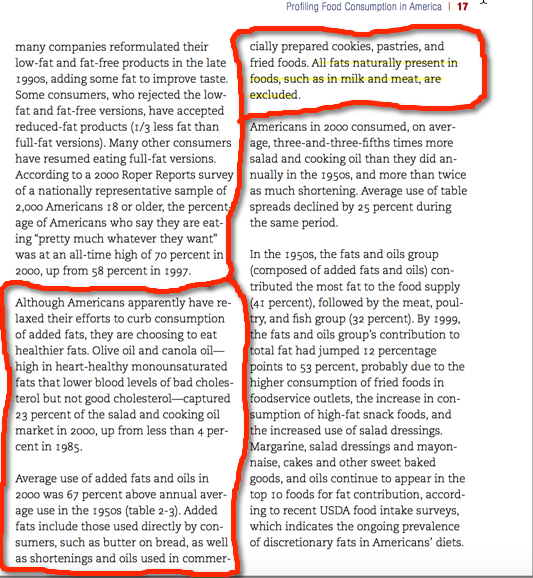 Added fats DO NOT include the fat in meat and dairy products (see yellow above).  Added fats are basically oils or shortenings of plant extraction, the very oils Ornish, Neal Barnard, CSPI and others of the vegetarian persuasion have promoted continuously since the 1980s.  And a great quantity of these oils are used in processing cookies and pastries.  But what Ornish wants you to believe from reading his editorial is that these added fats come from meats.

In the same third paragraph, after telling us we are eating 41 percent more meat, he tells us that we are eating 24.5 percent more calories than we did in 1970, implying, of course, that most of those calories came from meat.  Let’s look at what the document actually says: 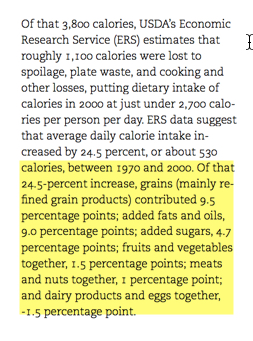 More than one third of the caloric increase (39 percent to be exact) comes from an increased consumption of refined grain products, a change Ornish would be proud of.  (See his book, Eat More, Weigh Less, in which he basically tells people to eat all the high-carb, low-fat foods they want to lose weight.)

In fact, grain consumption overall is up 45 percent:

Another 37 percent of the increased calories comes from added fat, which, remember, is not fat from meat or dairy.  This is the very vegetable oil fat Ornish has recommended since day one.  And is used along with the increased refined grain products to produce the pastries, cookies, etc. mentioned previously.

Added sugars account for another 19 percent of the increased calories.

If you read the part marked in yellow above, you’ll see that meat and nuts together contributed one percent of the increased caloric intake.  Notice that meat and nuts are considered together.  For whatever reason, the USDA likes to put meat and nuts in the same category.  After about 15 minutes of searching, I found A USDA-published chart that separated the two. Turns out that since 1970 nut consumption has increased by 27 percent, so I would imagine the one percent attributed to meats and nuts together would mainly come from nuts, a plant food Ornish embraces. 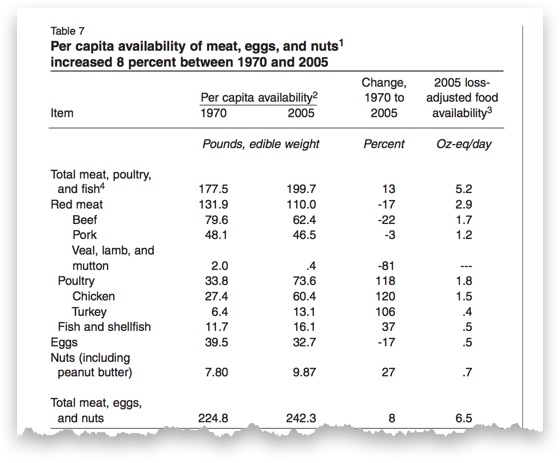 And egg and dairy consumption, which represents a negative 1.5 percent increase, is down.  So the total calories represented by those foods reprehensible to Ornish actually are a negative number.

So, overall, what Ornish wants us to believe is that the increase in obesity and diabetes in the United States come from increased meats and animal fats from dairy; but the US government statistics tell a different tale.  Here is the graph showing fat consumption over this time period: 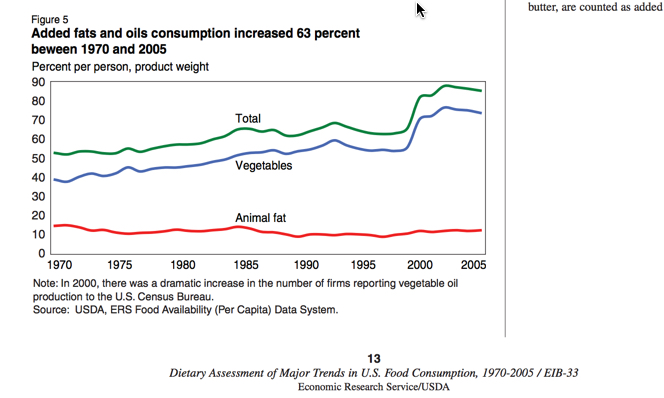 As anyone can see, the only increase in fat comes from vegetable oils, the very oils Ornish promotes.

All this obfuscation and we’re only at the third paragraph.  But you don’t even have to read that far. His very first sentence posits:

Many people have been making the case that Americans have grown fat because they eat too much starch and sugar, and not enough meat, fat and eggs.

Many people would be right according to the very government statistics Ornish presents.  Starch and sugar consumption is way up while that of meat hasn’t really changed and egg and dairy consumption has actually decreased.  Ornish needs to learn to interpret the data he cites.

Wish I had time to do more because this is just for starters.  But it points out a pattern all too familiar to seasoned Ornish watchers.