Hard wired to the past 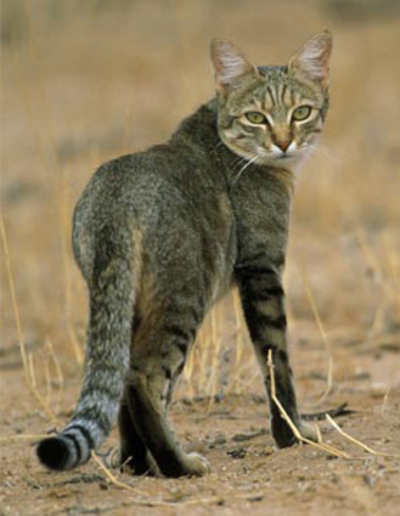 When you get right down to it, house cats are pretty useless. If you’re overrun with mice, cats can be a help, but that’s pretty much it. They are fiercely independent and, unlike dogs, which have a want-to-please-their-master nature, cats don’t really give a flip. They don’t fetch, they don’t roll over, they don’t sit up and beg, and, for the most part, they don’t come when called. If you had a kid who acted like a cat, you would probably put him/her up for adoption. So why are cats the most popular house pet in the world today?

Scientists using DNA analysis have determined that virtually all house cats alive today are descended from a specific line of wild cats, Felis silvestris lybica, that are indigenous to the Middle East. Although there are a number of lines of wildcats throughout the world, mitochondrial DNA analysis of all breeds of house cats appears to indicate they all descended from this one branch of the wildcat family.

With the geography and an approximate age of the initial phases of cat domestication established, we could begin to revisit the old question of why cats and humans ever developed a special relationship. Cats in general are unlikely candidates for domestication. The ancestors of most domesticated animals lived in herds or packs with clear dominance hierarchies. (Humans unwittingly took advantage of this structure by supplanting the alpha individual, thus facilitating control of entire cohesive groups.) These herd animals were already accustomed to living cheek by jowl, so provided that food and shelter were plentiful, they adapted easily to confinement.

Cats, in contrast, are solitary hunters that defend their home ranges fiercely from other cats of the same sex (the pride-living lions are the exception to this rule). Moreover, whereas most domesticates feed on widely available plant foods, cats are obligate carnivores, meaning they have a limited ability to digest anything but meat—a far rarer menu item. In fact, they have lost the ability to taste sweet carbohydrates altogether. And as to utility to humans, let us just say cats do not take instruction well. Such attributes suggest that whereas other domesticates were recruited from the wild by humans who bred them for specific tasks, cats most likely chose to live among humans because of opportunities they found for themselves.

Turns out that the answer to the domestication question is that cats were useful to our ancestors for the same reason they are useful to use: their mousing ability. When humans turned to agriculture and started storing quantities of grain, rodents became a problem because they bred like flies and overran the human food supply. Cats, which don’t eat grain but do eat rodents, were the solution, so we hired them on despite their quirks.

So are today’s cats truly domesticated? Well, yes—but perhaps only just. Although they satisfy the criterion of tolerating people, most domestic cats are feral and do not rely on people to feed them or to find them mates. And whereas other domesticates, like dogs, look quite distinct from their wild ancestors, the average domestic cat largely retains the wild body plan. It does exhibit a few morphological differences, however—namely, slightly shorter legs, a smaller brain and, as Charles Darwin noted, a longer intestine, which may have been an adaptation to scavenging kitchen scraps.

Unlike dogs, which exhibit a huge range of sizes, shapes and temperaments, house cats are relatively homogeneous, differing mostly in the characteristics of their coats. The reason for the relative lack of variability in cats is simple: humans have long bred dogs to assist with particular tasks, such as hunting or sled pulling, but cats, which lack any inclination for performing most tasks that would be useful to humans, experienced no such selective breeding pressures.

As a little diversion let me demonstrate the difference between art and science. The article on the domestication of cats took up five pages of text in Scientific American. J.R.R. Tolkien (yes, he of Lord of the Rings fame) pretty much transmitted the same information in a short poem. I came across this poem in my youth and was mesmerized by it. I loved the rhyming pattern and was amazed that so much information could be compressed into what seemed to be just a little piece of doggerel.

The fat cat on the mat
may seem to dream
of nice mice that suffice
for him, or cream;
but he free, maybe,
walks in thought
unbowed, proud, where loud
roared and fought
his kin, lean and slim,
or deep in den
in the East feasted on beasts
and tender men.
The giant lion with iron
claw in paw,
and huge ruthless tooth
in gory jaw;
the pard dark-starred,
fleet upon feet,
that oft soft from aloft
leaps upon his meat
where woods loom in gloom —
far now they be,
fierce and free,
and tamed is he;
but fat cat on the mat
kept as a pet
he does not forget.

As I said, on the surface it appears to be a little nursery-type of poem, but it’s not really. The rhyme sequence is astonishingly complex for such a small poem. The odd lines rhyme at the end while the even lines each have three internal rhymes, and it’s all done in just a few words. Yet is conveys the essential nature of cats better than the long Scientific American article without seeming to stretch to make any of the rhymes work.

It’s hard to believe that Tolkien wrote such a gem intending to include it in The Lord of the Rings, but decided not to. It ended up being kind of a throw away.

We, ourselves, like cats, walked “in thought unbowed, proud, where loud roared and fought [our] kin, lean and slim, or deep in den in the East [and] feasted on beasts” in a time long past. And just like fat cats on mats everywhere, we remember, too, those “fierce and free” primal days, if not in our conscious brains, at least in our DNA. We are hardwired to gobble meat with “huge ruthless tooth in gory jaw.” If you don’t believe me, take a look at this YouTube of chimps, our nearest genetic ancestor hunting and eating meat.

Beware. And I’m not kidding. This video is not for the squeamish, so be forewarned.

I’m not nearly as clever with verse as J.R.R. Tolkien, so I won’t attempt to capture the feelings this video engenders with poetry. But it should be obvious from the watching what hunts must have been like in our own past. I suspect not too different than the one you just saw. And, friends, that is the primitive circuitry deep inside of us all; we differ from the chimps you saw by a mere 6 percent of genes. That means that we have 94 percent of our genes in common with them. Au contraire to what our vegetarian friends would have us believe, we have the GI tracts of carnivores, not herbivores, and we were designed by nature to use every last speck of the nutrients in meat. We can survive on all-meat diets just fine, whereas we can’t survive on an all-plant diet without supplementation.

We’ve developed our large brains and our social instincts as a consequence of meat eating. I’m planning a post on this subject in the near future, so you can see how our very humanness arose because we developed a taste for meat. We are carnivores to our very cores – were we not, we would still be roaming the savannas with brains the size of grapefruits.

We may sleep and dream of larger houses, bigger cars and vacations to exotic locations, but our insides still remember when we were “fleet upon feet” and leapt upon our meat “where woods loom in gloom.” It was this memory that drove Paleolithic Man, with whom we have 100 percent of genes in common, to hunt to extinction all the large beasts (whose skeletons fill natural history museums everywhere) to extinction from the Bering Strait to Tierra del Fuego in about 1000 years. They didn’t make this effort because they used meat as a condiment.

Whether we like it or not, we are hard wired to our past.

Photo of F.s lybica by Noorderlicht