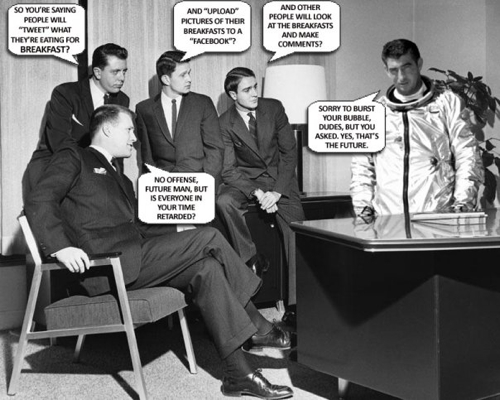 When I first learned of Twitter, I thought it was the most idiotic thing I had ever heard of. My thinking was similar to that of the suits in the photo above. Who gives a flying flip about the fact that I’m at the gas station or grocery store, or, God forbid, that I’m headed to the golf course?

But after reading about it a little more, I realized the potential. Not for having all my friends know where I am or what I’m doing every second of the day, but for the transmission of information about other things. I read a lot, and I’m constantly coming across articles of interest. My first thought is almost always, I should blog about that. Then I realize that the piece really isn’t worthy of an entire long blog post.

When we first started the website, I figured I could get the info out by putting it in the News Headlines section of the front page, but I soon realized that almost no one was reading the news headlines I put up. How did I figure this out? By putting up a news headline about, say, a new study that came out, then having 15 commenters ask me if I had heard of this same new study.

The other problem I have with the news headlines (other than that no one reads them) is that I can’t comment on them. If I put up a poorly done study showing that high-carb diets make us all healthy, for example, the few people who read the news headlines might think I thought it was a valid study when in reality is was a POS.

So, Twitter to the rescue. I can post on the almost blogworthy articles and do it with a little (very little) commentary. Plus I can, if necessary, inform readers if I happen to be stuck somewhere traveling with no wi fi available while comments stack up. I can use my iPhone (more about which later) to do that. And maybe, just maybe, if I am out and having an extraordinary low-carb breakfast, I may find myself taking a picture of it and posting to Twitter. But don’t count on a lot of that. If I get another hole-in-one, you can be sure that I’ll be burning Twitter up with photos.

Speaking of my new iPhone, I’ve taken yet another step into the world of higher technology, but my foray hasn’t been without a few missteps. I got the iPhone for a number of reasons, but one of the chief ones was so I could monitor this blog and deal with comments while away from my computer. I tried doing it the first few times with disastrous consequences.

I tried going through the comments and approving them, but in the process of trying to enlarge them (which one does by spreading one’s fingers while touching the touch screen) so I could read them without my reading glasses, I managed to delete several at a time the first few times I did this. So, if you sent in a comment and it vanished (I know people get some kind of message when their comments are awaiting moderation, but I don’t know what message they get – if any – if their comment is deleted), that may be what happened. One comment in particular that I deleted has been causing me heartburn. A cardiologist wrote in questioning my take on statins and referring to an old simvastatin study to bolster his argument, and I inadvertently deleted the comment with my fumble fingers. If you read this, Doc, please resubmit. I don’t want you to think I was avoiding your question.

You can follow my musings on Twitter in a couple of ways. There is a little blue bird and the words ‘follow me on Twitter’ in the upper right part of the blog beneath the ‘about me’ and above the big sort of orange RSS feed subscription button. You can click there, and you will be taken to all my updates. Once there, you can also sign up to be notified whenever there is a new update. I imagine that most people reading this will know vastly more about this process than I, but for those who don’t, there it is.

So, have fun with it. But be forewared, I probably won’t be able to keep from indulging myself in a political update or two here and there. The field is simply too rich to be ignored right now. Please bear in mine that I come to politics from a libertarian perspective, and that I pretty much loathe all politicians of all stripes.

Oh, and I haven’t yet succumbed to Facebook, but as the fact that I’m now on Twitter attests, I’ll never say never.