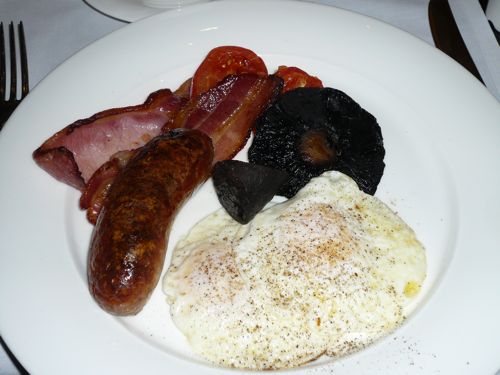 English breakfast at our hotel. A good low-carb diet.

It was bound to happen. Forever the low-fat diet promoters, whenever asked about low-carb diets, would always say: Show me the studies. Well, we showed them the studies, the vast majority of which demonstrated the superiority of low-carb diet, but they didn’t like what they saw. So they demanded more. The rallying cry became: Show me the long-term studies. Now that those are in, the anti-meat folks are running out of options. But one of their own great lipophobes (Lipid = fat; phobic = fear of. Lipophobe = fearer of fat.), David Jenkins, has come to the rescue.

Although the low-carbohydrate diet has proven itself a cut above the low-fat diet in virtually all parameters measured, in one little measurement it has fallen short, at least in the minds of the lipophobes. A number of studies of subjects following low-carb diets show that LDL-cholesterol levels don’t fall to the levels found in subjects following lower-fat, higher-carbohydrate diets. And this troubles the lipophobes mightily.

It matters not to them that there is no evidence showing that LDL-cholesterol levels cause or worsen heart disease; they believe with all their hearts that it does. In their fat-deprived brains, the lipid hypothesis isn’t a hypothesis at all. It is fact.

And so they set out to test the hypothesis that a low-carb diet without meat could achieve the Holy Grail of lipophobery: a lowered LDL-cholesterol.

The study published in this week’s Archives of Internal Medicine was picked up and reported on by multiple media outlets. It starts out with an opening statement laying out the problem of low-carb diets from the lipophobe’s perspective. Remember as you read this that virtually none of the statements presented as facts have ever been proven to be so.

There is a dilemma relating to the proportion and source of fat, protein, and carbohydrate that constitutes the optimal weight loss and cholesterol-lowering diet. Newer dietary approaches for the prevention and treatment of chronic disease increase the consumption of fruit and vegetables but reduce meat consumption either directly as part of the dietary strategy or displace meat by advocating increased intakes of fish, poultry, and low-fat dairy foods. Running counter to this advice has been the promotion of low-carbohydrate diets with increased meat consumption for body weight reduction and also in the longer term for the prevention and treatment of diabetes and coronary heart disease (CHD). These diets not only challenge the concept that red meat intakes should be reduced but also reverse the dietary macronutrient profile with fat and protein as the major macronutrients and carbohydrates as the minor macronutrient. Such low-carbohydrate diets have been shown to be effective in inducing weight loss, reducing insulin resistance, lowering serum triglyceride (TG) concentrations, and raising high-density lipoprotein cholesterol (HDL-C) concentrations. However, the higher meat diets have not resulted in lower low-density lipoprotein cholesterol (LDL-C) concentrations, but have tended to increase LDL-C concentrations except when vegetarian sources of fat and protein were included. This lack of a benefit for LDL-C control is a major disadvantage in using this dietary strategy in those already at increased risk of CHD.

There it is, the sticking point for lipophobes and the low-carb diet. It doesn’t matter what kind of good results those following low-carb diets achieve, in their minds all that matters is the LDL-cholesterol. Read that last sentence again. After all the description of the multiple benefits of low-carb dieting, it all boils down to LDL.

This lack of a benefit for LDL-C control is a major disadvantage in using this dietary strategy in those already at increased risk of CHD.

A major disadvantage they say. Will someone show us, please, all the evidence that there is a disadvantage? Gary Taubes wrote an entire book about the lack of evidence of any advantage to achieving a lower LDL and the lack of data showing saturated fat causing any increase in risk for heart disease, but that information is lost on these guys.

The authors of this paper are going to fix the low-carb diet problem. Here’s what they did in their own words.

Let’s take a look at what they did.

They recruited 50 subjects, 47 of whom actually started the study. The researchers randomly assigned the subjects to either a low-carbohydrate or a high-carbohydrate, calorie-reduced diet of a one-month duration. Couriers delivered the food, all of which was prepared in a metabolic kitchen, to the subjects, all of whom presented themselves to the clinic weekly for evaluation.

Here is a description of the diets:

Metabolically controlled diets in which all food was provided were consumed by the participants. The low-carbohydrate diet provided the minimum level of carbohydrates currently recommended (130 g/d) and eliminated common starch-containing foods, such as bread, baked goods, potatoes, and rice. The protein content was provided by gluten (54.8% of total protein), soy (23.0%), fruits and vegetables (8.7%), nuts (7.5%), and cereals (6.0%). Gluten was provided in the nut bread and wheat gluten (also called “seitan”) products and, together with soy, in burgers, veggie bacon, deli slices, and breakfast links. In addition, soy was provided as tofu and soy beverages. Nuts included almonds, cashews, hazelnuts, macadamia, pecans, and pistachios. The fat was provided by nuts (43.6% of total fat), vegetable oils (24.4%), soy products (18.5%), avocado (7.1%), cereals (2.7%), fruits and vegetables (2.3%), and seitan products (1.4%). The diet was designed to provide 26% of calories as carbohydrates, 31% as protein, and 43% as fat. The high-carbohydrate diet was a low-fat lacto-ovo vegetarian diet (58% carbohydrates, 16% protein, and 25% fat) using low-fat or skim milk dairy products and liquid egg whites or egg substitute to ensure a low–saturated fat and low-cholesterol intake. All diets were provided at 60% of estimated calorie requirements using the Harris-Benedict equation with allowance for exercise.

The low-carbohydrate diet featured viscous fiber-containing foods, including oats and barley, for the relatively limited amount of carbohydrates allowed, and the production of a “no starch” high-protein bread made entirely from ground almonds, hazel nuts, and wheat gluten. The carbohydrate foods and low-starch vegetables, emphasizing okra and eggplant, provided 6 to 7 g of viscous fiber per 2000-kcal diet. The bread was provided as part of the diet.

What were the results of this experiment after both groups were on their respective diets for a month? Well, it’s hard to say for sure because of the way the data were looked at. Fifty subjects were recruited, but only 47 actually started the program. Of these 47, only 44 completed the study (22 in each group). But the data were evaluated using an intention-to-treat analysis, which, at best, gives less than valid answers.

Here is the chart showing the study outcomes: 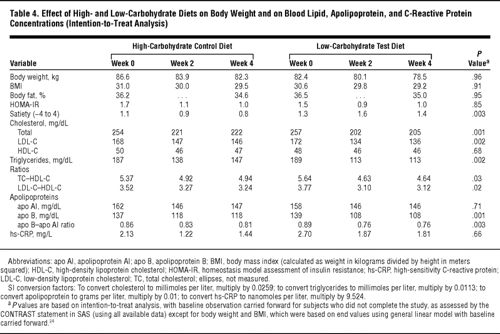 If we ignore the fact that these data were derived using an intention-to-treat analysis and take them as presented, we can see that the lower-carb veggie diet out performed the higher-carb, lower-fat diet in a number of parameters. Let’s look at those that were statistically significant (a P value of less than 0.05).

Satiety was greater in the higher-fat diet. As you can see, subjects on the low-calorie, high-carb diet got hungrier as the study progressed. Those on the lower-carb diet got minimally less hungry as compared to the start of the study, which isn’t a surprise as fat is filling.

As anyone with any experience with low-carb diets would predict, triglycerides fell markedly as compared to those on the control diet.

All the lipid ratios were improved more on the low-carb diet.

Most low-carbohydrate diets have not reported the effects on apolipoproteins. The reduction in apo B and the apo B–apo AI ratio observed in the present study is a further confirmation of the potential CHD benefit that might be expected from this dietary approach to body weight reduction. In some studies, the apolipoprotein concentrations have been claimed to have greater predictive value for CHD events than more conventional lipid variables.

I find the last sentence in the above quote really intriguing.

In some studies, the apolipoprotein concentrations have been claimed to have greater predictive value for CHD events than more conventional lipid variables.

Since apolipoprotein levels are indicators of the various cholesterol particle sizes, I would say this is a great understatement. Virtually all of the research on this subject has shown that low-fat, high-carbohydrate diets – even though they reduce LDL-cholesterol – end up resulting in LDL-cholesterol of the small, dense particle size, which is much more atherogenic than the larger, fluffier particles found in subjects after following low-carb, higher-fat diets. To report that this is the case in just some studies is disingenuous to say the least. But to report it otherwise would give the lie to the notion that LDL-cholesterol levels by themselves amount to much of anything. And we wouldn’t expect a true lipophobe to do that, would we?

I would bet that if the plant-based lower-carb (130 g/day) diet were compared with a meat-based real low-carb diet (50 g/day or under), the real low-carb diet (such as the one pictured at the top of this post) would win across the board. The LDL-cholesterol number may not go down as much, but who really cares? LDL-particle size would be larger (I calculated particle size in this study, and there was no change) and all other parameters would probably be improved more.

Maybe someday someone will do such a study and prove me right. Or wrong. In any case, this study has some value in that now maybe all those docs who have shied away from prescribing low-carb diets to their patients because of ungrounded fear of a minimal increase in LDL-cholesterol will give this version a try. For all its faults, it’s better than the low-fat, high-carb diet.