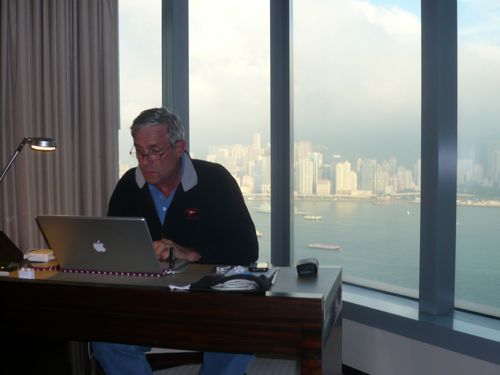 Your faithful correspondent slaving away

As those who follow me on Twitter know, MD and I made it safely to Hong Kong. We have in enormously busy schedule while we’re here, so I’ll put up smaller posts as we go along interspersed with some larger ones as I have time. As you can see from the above photo, I’m hard at it, ensconced in our hotel room overlooking the harbor with the Hong Kong skyline in the background. Below is another photo from our hotel room window. Our hotel (for one night) is on Kowloon across from Hong Kong Island, which is the skyline you see. Actually, it’s only a small part of the skyline. Hong Kong is New York on steroids. An amazing place. 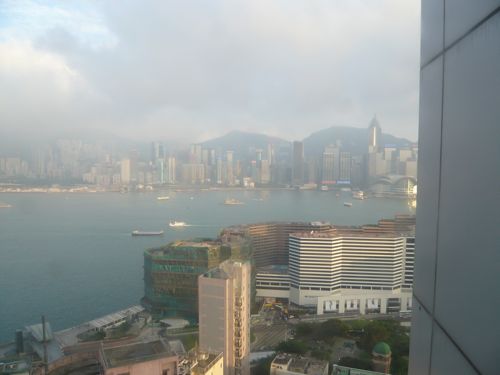 We flew over on Cathay Pacific business class, which, if you’ve got to make a 15 hour flight, is the only way to go. Great seats that make into beds, great service and spectacular food. The only weird thing about the whole experience is the realization of how seriously the Chinese and the Honk Kong-ese take the swine flu. All the cabin attendants on the plane wore masks. We had to fill out a health declaration to enter Hong Kong and another when we got to our hotel. I would estimate that about a fifth of the people walking around are wearing masks.

But, masked or not, the folks at Cathay Pacific put out some good food. Good low-carb food, at that. Below is a photo of my breakfast on the plane. Lightly scrambled eggs with salmon, terrific wobbly bacon, sausage, broiled tomato and some hash browns (that went uneaten). 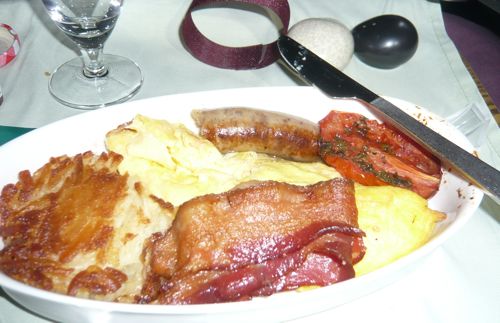 Last night we ate in a restaurant not too far from our hotel. We asked our guide (the guy we’re working with who is a Brit, but lives here about half the time) for a traditional restaurant, not a tourist restaurant. The restaurant he chose was capacious; I would bet there were at least 200 people dining there. And we were the only non-Asians.

We sat at a large round table with a lazy susan in the middle. The waiters kept bringing food and putting on the lazy susan; we rotated the dishes and served ourselves from them with chopsticks. Our host apologized because he said the restaurant wouldn’t be serving rice like we were used to in Chinese restaurants in the US. He said the notion that people ate a lot of rice over here is not true – at least not in Hong Kong and the parts of China to which he travels often. (Our host doesn’t know what MD and I do – we are here on a totally different matter that has nothing directly to do with low-carbing.)

We had numerous dishes, all of which were some kind of meat. The favorite of the table was crispy beef, which is shown below. Absolutely delicious. 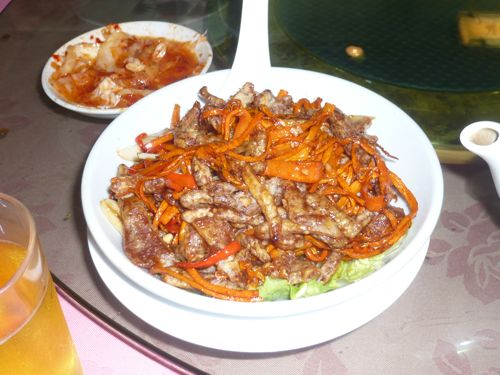 We ate mountains of various kinds of meat and fish and ended up with a giant plate of Peking duck, which we were almost (but not quite) too 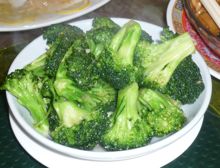 full to eat. During this entire feast, the servers brought only one vegetable dish to the table. It’s pictured at the right. Sauteed, not steamed, broccoli. Delicious. Not a single grain of rice did we see. A few noodles, but not even many of them. And no bread. And, sadly, no napkins. There was a box of what we would call facial tissues on the table that we used as napkins. But that was it. Oh, in looking at the picture above of the crispy beef, I noticed one other vegetable dish that I had forgotten about because I hadn’t photographed it specifically. It is the Chinese cole slaw to the upper right of the beef. All cabbage that is tangy, crisp, spicy and delicious. They must have brought us a dozen of these little dishes of it.

I looked around at as many of the other 200 patrons as I could see from our table and as we walked in and out. All were eating the same things we were. Meat, meat, meat. Of the 200 patrons and dozens of servers I saw, there wasn’t a single obese person. My observation of Hong Kong as a whole is that there aren’t really any obese people here, at least by US standards. There is some chubby, but not much obese. At least not that I’ve seen.

We are heading via ferry and car to mainland China today to go to an industrial city with a population of 60 million. You read that correctly. 60 million. The factory we are working with is there, and I’m keen to see it. We will stay there tonight, then be back to Hong Kong tomorrow.