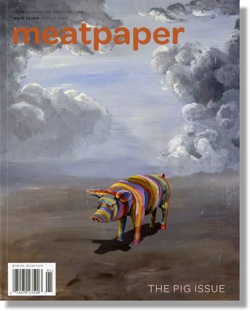 While on a recent whirlwind trip that included a stop in Seattle, I purchased a copy of Meatpaper at my favorite newsstand hard by the Pike Place market.  I always grab a copy of this magazine whenever I’m in Seattle because I can never find it anywhere else. Today I finally broke down and subscribed.

The quarterly Meatpaper was founded by a couple of vegetarians who made the conversion to meat eating a few years back.  (The founders say that when vegetarians cross over to the meat-eating dark side, bacon is the most common conversion food.)  It’s a difficult magazine to pigeonhole.  One would think it would revel in meat eating, and, in a way, it does.  But it does it in a daredevil sort of way, much in the way a magazine on skydiving might portray the thrill of that sport while still noting that certain death is only a chute failure away.  My take is that the writers and editors believe that meat-eating is a perilous undertaking, but one that many people choose for the taste despite the risks involved.  As anyone who had read this blog for anytime knows, my beliefs don’t quite fall that way.

The most recent issue contains a couple of articles I want to tantalize you with.  One that describes an almost unbelievably scrumptious food that I’ve yet to eat, at least knowingly, and another article I find deeply disturbing.

First, to the scrumptious.

In “Schmaltz Redux,” Daniella Cheslow briefly describes the history, disappearance and resurgence of a staple of Jewish cooking: schmaltz.  For those of you who don’t know what it is (and I was in that category until I read this article), schmaltz is basically chicken lard. Small pieces of chicken fat are cooked slowly until they resolve into an oil.  Throw in a few pieces of onion during the process, and you’ve got schmaltz, which can be used much as lard or duck confit.

To give you an example of what I mean about daredevil writing focusing not on just the delicious and nourishing virtues of schmaltz, but on the risks (non-existent, in my opinion) of consuming it.

“I love schmaltz.  But it’s very unhealthy, it’s all saturated animal fats.  I stopped eating schmaltz when my grandmother died in 1972,” said Susan Rosenthal, 59, a physician from East Brunswick, New Jersey. “I have a master’s degree in nutrition [a dead give away that the woman knows almost nothing about nutrition], so if I would have given my children schmaltz, that would have been shameful.”

I’m sure this enlightened woman would have no qualms about giving her children all the olive oil they wanted.  But according to the USDA nutrient database of foods, olive oil contains 14 grams of saturated fat per 100 g whereas chicken fat contains 20 grams in the same amount. But 100 g is 3.5 ounces, and since schmaltz is used as a cooking oil, I suspect most people don’t eat much more than an ounce at a time, which would mean the schmaltz would give the children a little over 5 g of saturated fat while the olive oil would contain 4 g.  A difference of under two grams.  Not a huge difference in my opinion.  And since the schmaltz also contains a lot of both monounsaturated fat and polyunsaturated fat, it can’t really be characterized as “all animal saturated fats.”  But such misinformation is what comes from a master’s degree in nutrition.

The article goes on to detail a little more of the history of schmaltz and its resurgence but, at the end of the piece, once again the specter of early death from eating schmaltz rears its head.

To bring her article to a close, Cheslow offers a quote from David Sax, author of Save the Deli:

There’s something these days that’s sexy about it [making food from scratch].  I think [schmaltz] is coming back for that reason, and also people appreciate the taste, and they realize that it’s going to provide a richer experience.  Literally, figuratively, tastefully, and spiritually, it’s a heart stopper. [my italics]

I have elicited a promise from MD that when our brutal travel schedule over the next month and a half comes to a close, she will make us some schmaltz, an event I will dutifully record photographically.  Until then, however, you’ll have to make do with photos and instructions I found online.  The schmaltz in the photos in this blog post look great, but the uses the blogger makes of the schmaltz are not my cup of tea.

Now to the disturbing.

When you think Argentina, you think beef.  The Pampas, gauchos and endless herds of cattle.  For years Argentina has been one of the great beef reservoirs of the world.  But unless things change, that all may be coming to an end because the cattle are being displaced by a more profitable commodity: soy.

“Plowing the Pampas,” an article written by Nicholas Kusnetz, describes how many Argentinian ranchers are hanging up their bolas and picking up a plow.  Why?  Because soybeans are a vastly more profitable use for the land than raising cattle.

Kusnetz spoke about the switchover with scientists at a government research station in the Pampas.

Five years ago, one of the researchers told me, I would have been surrounded by pasture.  Now, nearly all the cows were crowded into feedlots.  The land was a tricolored patchwork as far as the eye could see: thousands of acres of deep green corn leaves, lighter green soybeans, and the straw-colored stubble of cornstalks that had been sprayed with Roundup to ready the field for soy.

At the station, two soil specialists showed me where they experiment with different crop rotations.  They have found that their most productive “rotation” is just the opposite: all Roundup Ready soy, all the time.  They don’t know why, they tell me, but it grows well.  They don’t see any reason to grow anything else.

“Pure soy,” they say. “The more soy you have, the better your profits will be.”

The article goes on to describe how the economic realities are driving the ranchers to become soy farmers.  I don’t have a problem with this; you’ve got to expect that people will follow the money.  What does trouble me is that a crop with such a disastrous effect on health could be more valuable than cattle, which have been providing humans food for millennia.  But the herds are shrinking, and soon, if things don’t change, in a few years Argentina could become an importer of cattle.  An almost unthinkable proposition.

Should this disastrous end come to pass, I wonder if the grand ranches of the Pampas will still raise a few cattle along with thousands of acres of soybeans.  And will these few beef grazing in a small lot allow the farmers to continue to refer to themselves as ranchers despite the vast majority of their income coming from soy?  Probably.  I’ve seen it happen in Arkansas.

The delta lands east of Little Rock are made up for the most part of vast soybean growing operations.  The farmers who own and farm the land were descended from cotton farmers.  Cotton farming was the tradition, but economics won out, and most of the cotton fields were replanted in soy.  But old traditions die hard, and most of these farmers still keep a small patch of cotton on their land, and if asked what they do, they reply that basically they’re cotton farmers but they grow some beans on the side.

I suspect that if things continue in Argentina, many self-proclaimed ranchers will be growing a few beans on the side as well.

I would encourage you to subscribe to Meatpaper to keep up with what’s new and edgy in the world of meat.  I have no affiliation with the magazine nor do I get any click-through income if you subscribe.  I just like the idea of former vegetarians writing a magazine on meat and making a go of it.  And I want to help.

I’m going to start a new tradition with this post.  As anyone who reads this blog regularly knows, I read a lot.  People often ask me what I’m reading, so I’m going to start putting my current reading list at the bottom of the posts so those of you who are interested can keep up.

Survival of the Fattest by Stephen Cunnane

Atlas Shrugged by Ayn Rand.  (This isn’t a reread.  I’ve never read the thing, so I figured it was about time.)

The Plague by Albert Camus  (I’ve never read this one either, and it’s taking me forever to get through it.  But I’m almost finished.)

One Good Turn by Kate Atkinson

The Genius in all of Us by David Shenk

The Girl who Kicked the Hornet’s Nest by Stieig Larsson (This one won’t be available in the U.S. until May 25.  A friend who visited me from the UK, where it has been available for months now, brought me a copy.)