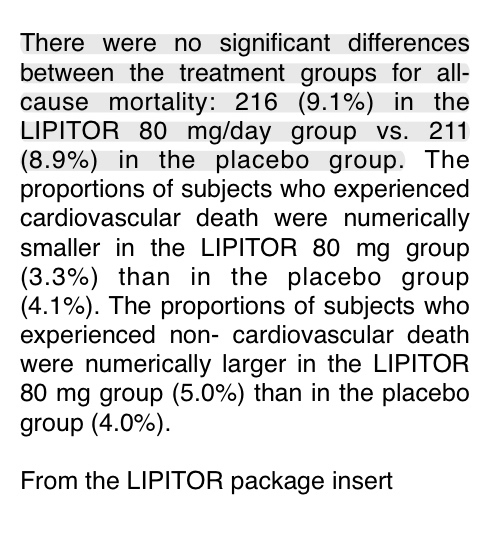 In the Jan 9, 2012 issue of Archives of Internal Medicine in the Online First section an article appeared showing that women studied as part of the Women’s Health Initiative who were on statin drugs during the study developed diabetes at greater rates than those who were not on these drugs.  According to the statistical analysis of the authors, being on a statin increased the relative risk of developing diabetes by 48 percent!

These were observational studies and, as such, can’t be used to determine causality.  But they are interesting nonetheless because according to one of the authors there have been other clinical trials showing the same thing.  One of the authors of the study, Dr. JoAnn Manson, Professor of Medicine and Harvard Medical School commented on the findings of this study and what they mean to doctors who put patients on statins.  Dr. Manson’s commentary was provided by Medscape, a site for physicians to go to learn about the latest in medical wizardry.  The site requires registration, but if you are interested, you are allowed to register even if you aren’t a physician.

I decided that instead of commenting on Dr. Manson’s video after the fact, I would do it in real time right on the video.  This is my first effort at anything like this, so you can let me know what you think of it.  If you find it enjoyable and/or helpful, please drop a note in the comments, and I may be inspired to try it again.

You’ll notice my repeated assertions that statins don’t provide any benefits.  What I’m talking about is the fact that statins have never been shown to decrease all-cause mortality. (See the first sentence in the Lipitor product insert above.)   In other words, if you take a statin, you gain no increase in life expectancy.  If I, myself, am evaluating a drug that I might have to take, I would certainly want to make sure it didn’t simply replace one risk factor for another.

Note: The comments on this video made by me are my opinions based on my reading of the medical literature.  They are no substitute for consultation with your own physician, and should in no way be construed as medical advice.  The decision to start, continue or discontinue any drug regimen is a serious one and should be a decision made after careful discussion with your own physician. 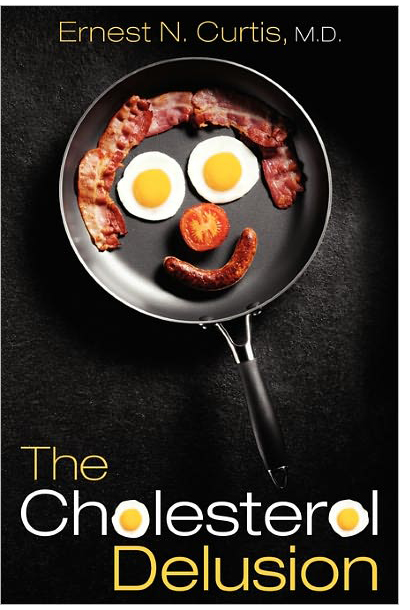 As I mentioned in the video above, I just read a book by a cardiologist practicing the California who has dived deeply into the scientific evidence and feels the same way about the lipid hypothesis as I do.  And about statin drugs.  And this a real cardiologist.  Ernest N. Curtis, M.D. has written The Cholesterol Delusion, a book that takes a different approach to dismantling the lipid hypothesis than The Great Cholesterol Con, but is just as effective.  If you’re still in the camp that worries about cholesterol, you may take solace from the information in this terrific book.  If you need to persuade a friend or loved one, this is the book.

If you enjoy the way I sometimes dissect studies on this blog, you will love Dr. Curtis’s book because that’s what he does.  He dismembers the studies that the lipophobes rely on to maintain their fantasy that cholesterol really does cause heart disease.

Take for example the Lipid Research Clinics Coronary Primary Prevention Trial (LRCCPPT), the authors of which made the oft repeated claim that each 1 percent reduction in cholesterol gives a 2 percent reduction in cardiac risk.  Dr. Curtis eviscerates this study and describes how the authors dishonestly spun their experiment’s end result, which was essentially meaningless, in such a way that it has become one of the mainstays in the argument for cholesterol lowering.

During the study, 7 percent of the subjects on a cholesterol-lowering drug died while 8.6 percent of those on placebo died.  Dr. Curtis describes how this minuscule difference can be converted into a relative risk difference of 19 percent, which is what the authors were crowing about.  But that number isn’t nearly as important as the absolute risk, which is the difference between the 8.6 and 7, or 1.6 percent.  So those subjects on the drug (which is not without side effects and costs if the subjects had been paying for it themselves) ended up with a 1.6 percent lower absolute risk than those who didn’t take the drug.

But that’s not the end of the story.  Was the 1.6 percent difference even statistically significant?  Here’s where things get interesting.

How significant is the difference between 7.0% and 8.6%? Common sense tells us that this difference is of no practical significance.  But what about the more esoteric criterion of statistical significance?  According to the pretrial protocol, which called for a level of certainty with p<0.01, it didn’t even come close.  If one applies the more lenient criterion of p<0.05, it still fails the test when the typical two-tailed test is employed.

If one applies the p<0.05 criterion and uses the less rigorous one-tailed test, however, this difference barely qualifies as statistically significant.  This is, in fact, what the investigators did.  In one of the most flagrantly dishonest acts ever seen in a major medical study, the authors apparently changed the criteria for significance after reviewing the data.

The is absolutely shameful behavior way beyond the pale.  When researchers design a study, they set on the front end the statistical parameters by which the outcome of their experiment is to be measured.  They do this at the start so there can be no fudging at the end when the results are in.  Everyone agrees to the standards and off they go to do the study, and the outcome either reaches the level of statistical significance by the predetermined measure or not.  In this case, the standards were set, but when they weren’t reached, the standards were reduced once and then again before the results barely were able to claim statistical significance.  Shameful indeed.  And this is one of the major studies, quoted daily, showing that a reduction in cholesterol brings about a reduction in heart disease.  Jesus wept.

Why didn’t other scientists say anything about this.  One did and wrote  a withering critique in the Journal of the American Medical Association, but the journal kept it under wraps for a year before publishing.  By that time, the LRCCPPT had gotten so much coverage and the cholesterol-lowering-prevents-heart-disease mantra had swept the nation, so everyone pretty much ignored the grousing of a scientist who saw the emperor without any clothes. (You can’t tell much from the abstract I linked to, but Dr. Curtis reprints some of the juicier parts.)

This study isn’t the only one with warts all over it nor the only one routinely misinterpreted.   But it’s not surprising given the vast amount of money at stake in the business of reducing cholesterol by drug therapy whether that cholesterol reduction is important or not.

After you read Dr. Curtis’s book you will become as big a skeptic as I am of medical studies and regard them all with a jaundiced eye.