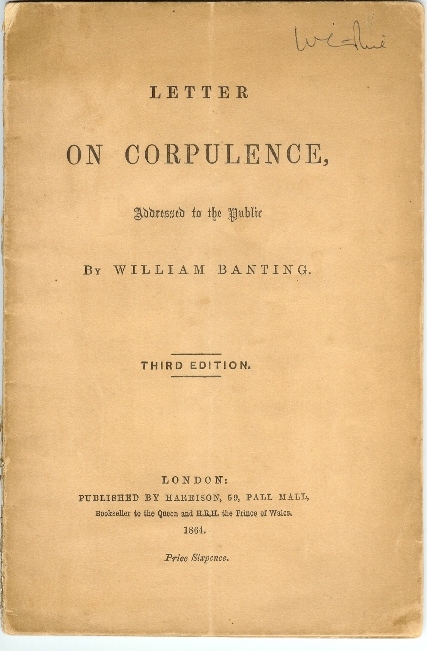 I was looking through my (as yet unorganized) library a couple of days ago and came across a couple of books that I thought I should blog about. After giving it some more thought I decided to start a series of posts on the books that I found most essential in my own low-carb reading. These would be the books that should make up the core of any good low-carber’s library. So here we are with the first post in the series.

Probably the most influential diet book of all time was not really a diet book, but a bound letter written by a satisfied patient. William Banting (1797-1878) was a middle-aged undertaker living in London who had become obese. He sought the help of multiple physicians and other practitioners who prescribed a variety of remedies for him, none of which worked. Or as he put it

I consulted…high orthodox authorities (never any inferior adviser), but all in vain. I have tried sea air and bathing in various localities, with much walking exercise, taken gallons of physic and liquor potassae, advisedly and abundantly; riding on horseback; the waters and climate of Leamington many times, as well as those of Cheltenham and Harrogate frequently; have lived upon sixpence a-say, so to speak, and earned it, if bodily labour may be so construed; and have spared no trouble nor expense in consultations with the best authorities in the land, giving each and all a fair time for experiment, without any permanent remedy, as the evil [his obesity] still gradually increased.

He tried all the above along with simple diets, i.e., low-calorie diets, without success. Despite all his efforts and all the advice of the many practitioners whose opinions he sought

the evil still increased, and, like the parasite of barnacles on a ship, if it did not destroy the structure, it obstructed its fair, comfortable progress in the path of life.

Banting finally fell into the hands of a physician who recommended a low-carb diet, or, in the words of the time, a diet lacking in starch and saccharine (sugar and sugar-sweetened foods) matter.

He took to his new diet with a gusto and began for the first time to lose substantial amounts of weight. As the months wore on, his fat dropped off. After about a nine months he had lost 35 pounds (which made a large difference as he was only 5′ 5″ tall) and was ecstatic. In fact, he was so fired up and had had enough people ask him about his regimen

that he decided to publish at his own expense a small, bound pamphlet describing his own experiences that he could pass out gratis to anyone who wanted one.

The first printing of 1000 of these pamphlets that Banting called A Letter on Corpulence went fast. He then wrote an addendum and printed 1500 copies of this second edition and gave them all away. By this time the demand had become such that Banting didn’t want to continue the expense of printing these booklets, so he wrote yet another addendum, called it the third edition, and charged sixpence for it, which was enough to cover its cost. Banting’s Letter on Corpulence went through many more editions and started the first worldwide dietary movement.

So popular were Banting’s writings that his name became synonymous with dieting. In the UK people still often speak of banting when they are talking about dieting. Other languages picked it up and use bant or some variant as their word for dieting in general, not just low-carb dieting.

I happen to own an actual copy of the third edition of Banting’s Letter on Corpulence. I have scanned it and made it available online in its original size to anyone who wants it. So now you’ve got the first book for the core of your low-carb library. (Click here for your copy)

I reread this little gem before I decided to go to the effort to scan it and put it up (all of which was a giant pain in the rear), and discovered it to be a valuable addition to any low-carber’s library because – although it was written in 1864 – just about everything in it applies to our current situation. And before I put it up I searched online and found a number of sites that had PDF’s of (mainly) the 4th edition, but I didn’t enjoy reading those nearly as much as I did the actual pages. The Victorian prose went down more smoothly when read on yellowed Victorian pages with a bend in the middle made by someone who a hundred or so years ago folded it in half to stick in his pocket. I wanted readers of this blog to be able to have the same experience – or as close to that as possible, so go for it.

The whole thing takes about 15 minutes to read (maybe a half hour max) and is loaded with pearls of wisdom or explanations of situations many of us find ourselves in today.

I’ll go through just a few quotes from the Letter to show you what I mean.

earnestly hoping the subject may be taken up by medical men and thoroughly ventilated.

He has a great description of how obesity is regarded by both the public and the medical fraternity that rings true today.

Obesity seems to me very little understood or properly appreciated by the faculty and the public generally, or the former would long ere have hit upon the cause for so lamentable a disease, and applied effective remedies, whilst the latter would have spared their injudicious remarks and sneers, frequently painful in society, and which, even on the strongest mind, have an unhappy tendency.

And he – like thousands of patients I’ve seen over the years – describes how he got fat.

…my corpulence and subsequent obesity was not through neglect of necessary bodily activity, nor from excessive eating, drinking, or self-indulgence of any kind, except that I partook of the simple aliments of bread, milk, butter, beer, sugar, and potatoes more freely than my aged nature required, and hence, as I believe, the generation of the parasite, detrimental to comfort if not really to health.

Among the many prescriptions he got for reducing his bulk was this one to exercise.

I consulted an eminent surgeon…who recommended increased bodily exertion before my ordinary daily labours began, and thought rowing and excellent plan. I had the command of a good, heavy, safe boat, lived near the river, and adopted it for a couple of hours early in the morning. It is true I gained muscular vigor, but with it a prodigious appetite, which I was compelled to indulge, and consequently increased my weight, until my kind old friend advised me to forsake the exercise.

As you can see, Banting had about the same results with his exercise program that people do today with theirs.

He was told to eat ‘light food’ and in moderation, but to no avail.

I have spared no pains to remedy this by low living (moderation and light food as generally prescribed, but I had no direct bill of fare to know what was really intended), and that, consequently, brought the system into a low impoverished state, without decreasing corpulence, caused many obnoxious boils to appear, and two rather formidable carbuncles, for which I was ably operated upon and fed into the increased obesity.

When he finally fell into the hands of someone who had good sense, he got the following advice:

The items from which I was advised to abstain as much as possible were:–Bread, butter, milk, sugar, beer, and potatoes, which had been the main (and, I thought innocent) elements of my existence, or at all events they had for many years been adopted freely.

These, said my excellent adviser, contain starch and saccharine matter, tending to create fat, and should be avoided altogether.

Take a look at pages 18-19 in the book to see the actual diet Banting ended up following. Note how much booze he drank along with his low-carb fare. Had he only drunk half this much, he would have no doubt lost half again as much weight.

Here’s what he was eating before. Is it any wonder he was corpulent?

My former dietary table was bread and milk for breakfast, or a pint of tea with plenty of milk and sugar, and buttered toast; meat, beer, much of bread (or which I was always very fond) and pastry for dinner, the meal of tea similar to that of breakfast, and generally a fruit tart of bread and milk for supper. I had little comfort and far less sound sleep.

How many people – maybe even you yourself – find themselves saying something along these lines after they discover the beauty of the low-carb diet.

I can conscientiously assert I never lived so well as under the new plan of dietary, which I should have formerly thought a dangerous extravagant trespass against health.

Here Banting is 150 years ahead of his time.

The simple dietary evidently adds fuel to the fire, whereas the superior and liberal seems to extinguish it.

In other words, low-cal, low-fat diets add fuel to the obesity fire while higher-calorie, higher-fat diets do the opposite. We know why now.

I…have frequently indulged my fancy, experimentally, in using milk, sugar, butter, and potatoes–indeed, I may say all the forbidden articles except beer, in moderation, with impunity, but always as an exception, not as a rule. This deviation, however, convinces me that I hold the power of maintaining the happy medium in my own hands.

And, like all of us, he has seen people successful on the diet get sabotages by their friends and family.

Many…doubtless return to their former habits, encouraged so to act by the ill-judged advice of friends who, I am persuaded (from the correspondence I have had on this most interesting subject) become unthinking accomplices in the destruction of those whom they regard and esteem.

You’re on what?!?!?! One of those dangerous high-protein diets? You’ll damage your kidneys; you’ll have a heart attack; etc. I wonder what they said back then?

Finally, Banting was really prescient when he used the term ‘parasite’ to describe the fat accumulating on his body.

The word “parasite” has been much commented upon, as inappropriate to any but a living creeping thing (of course I use the word in a figurative sense, as a burden to the flesh), but if fat is not an insidious creeping enemy, I do not know what it is.

He used the term ‘parasite’ figuratively, but fat actually does invade the viscera. And stimulates the innate immune system to attack it just as a parasite would. Macrophages swarm over and between the fat cells just like they would if this visceral fat were a parasite or other foreign invader. In fact, having a lot of visceral fat is not much different than having a big splinter deep in the middle of your belly. It catalyzes the same immune response. Banting hit the nail on the head when he called fat a parasite way back in 1862 (the date of first publication).

Spend your 15-30 minutes reading this little book, and you’ll realize just how little things have changed in 150 years. Enjoy.

There is now also available a terrific audio version of Banting’s Letter on Corpulence.