Do men lose more weight than women on low-carb diets?

MD and I just got back from Low-Carb Denver 2020 where I made a presentation that will ultimately make its way to YouTube.  Preparing for the presentation occupied most of my time before the meeting–I’m a chronic slide-making procrastinator–so I abandoned blogging for  a bit.

Fortunately, the organizers put me on just about first on Friday morning, the first day of the conference, which put me under undo pressure, but ended up great for me.  Since I am such a procrastinator, I’m usually making slides right up to the moment I go on stage.  If my talk is the 2nd or 3rd day, I miss a lot of the conference, because I’m locked away in my hotel room cranking out slides.  This time, since I was almost the first presenter, I was forced to get my frigging slides finished early and was able to attend and enjoy the rest of the conference.

I didn’t know until almost the very last minute whether the conference was even going to happen or not.  In fact, I was texting the organizers just as I was boarding the flight to Denver.  As it ended up, about a third of the presenters did not attend due to their institutional travel bans.  Consequently, I missed hanging out with a lot of good friends who didn’t make it to Denver.

Over the next few weeks, I’ll post on some of the presentations I thought would be of interest and informative to readers of this blog.

Today I’ll post on a presentation by Dr. Lucia Aronica from Stanford about a subject I’ve had my own suspicions about for ages.  But had no data other than my own pondering.

Back in 2018 a study done at Stanford and published in JAMA showed that men and women lost equal amounts of weight on either  a healthy* low-carb or healthy low-fat diet.

Here’s the set up.

609 overweight men and women average age 40 were randomized into two groups.  305 followed a healthy* low-fat diet while the other 304 went on a healthy* low-carb diet. Both groups had extensive counseling, dietary instruction, and hand holding for the one year duration of the study. Along with weight loss, the study authors were looking to see if genotype or insulin secretion had any bearing on outcomes.

As the conclusion reports:

In this 12-month weight loss diet study, there was no significant difference in weight change between a healthy low-fat diet vs a healthy low-carbohydrate diet, and neither genotype pattern nor baseline insulin secretion was associated with the dietary effects on weight loss. In the context of these 2 common weight loss diet approaches, neither of the 2 hypothesized predisposing factors was helpful in identifying which diet was better for whom.

The New York Times positively chortled with glee as it appeared that the low-carb diet was held to a draw by the low-fat diet.  Since both the low-carb and low-fat diets were healthy,*i.e., they were whole food diets devoid of refined carbs and sugar, it appeared that the difference between the weight-loss potential of the two diets disappeared when whole foods were used.

“The key to weight loss is diet quality, not quantity, a new study finds” screamed the headline above the NY Times article. Those nasty low-carb diets work no better than the low-fat ones as long as the low-fatters avoid sugar and refined carbohydrates.

But not so fast.

That was before the team took a new look at the old data.

Normally, I’m suspicious when research teams start slicing and dicing the same published data in an effort to generate yet another paper. But in this case, I believe the extra work was valid.

Dr. Aronica reported on how the study team re-evaluated the data by comparing how men and women responded to the two diets.  Did they respond differently to the two diets, or the same?

Before she revealed the outcome, she made the point that there is a difference between sex and gender.

Sex is basically the hardware and it is binary.  Gender is the software and is much more fluid than sex, the hardware.  She started by making an interesting point.  She asked us to take a look around at the other members of the audience.  She said odds are that the women are better dressed than the men.  She was right.  She pointed out a number of other differences between men and women besides dress in terms of likes and dislikes.

These are all generalizations, of course, as some little girls play with trucks while some little boys play with dolls.  But in general it goes the other way. Same with tastes in food and a host of other things.  Her point is that since there are many obvious differences between the sexes and genders, maybe there are differences in response to drugs and even diets as a function of both gender and sex.

So, with that jumping off point, the researches re-evaulated the data in terms of sex and type of diet.  What they found was most interesting.

When the team looked at the study outcomes by sex instead of by groups containing both sexes, a difference became apparent.

Accounting for baseline differences in body weight, men following the low-carb diet lost the most weight, while men on the low-fat diet and women on both the low-fat and low-carb diets all lost about the same.  Below is a photo from the slide:

What Dr. Aronica is talking about in her title, i.e., The Sex Round is that when looked at strictly from the perspective of sex, this is the outcome.

But what about gender? How does behavior and likes and dislikes fit into the picture?

That’s where it gets interesting.

The dietary goal of the low-carb group was to keep net carbohydrate intake below 20 g/day.  The other group–the low fat arm–was instructed to eat no more than 20g of fat per day.  Members of both groups deviated from those fairly rigid dietary limits.

But who deviated the most?  And from which diet?

During the year over which the study took place, the researchers spent a lot of time analyzing the dietary adherence to the above goals and measured compliance.  They were able to calculate a deviation score, which is a measure of compliance to the diet. As Dr. Aronica said in her talk:

According to Dr. Aronica, whereas the simple weight loss measurement is a function of sex (men lost more than women), the deviation score was more a measure of gender. Compliance is more a result of likes and dislikes and personal preferences or societal molding.

Women were more compliant on the low-fat diet than they were on the low-carb diet.  Here is the slide showing the compliance scores. Remember the positive direction indicates lower compliance.

It’s difficult to tell from the slide above, but the men were similarly compliant on both the low-fat and the low-carb diets.  It looks like there is a big difference, but it wasn’t statistically significant.  What the graphic tells us is that men lost significantly more weight and body fat on the low-carb diet than they did on the low-fat one, despite being similarly compliant on both diets.  For men, low-carb was the big winner.

Dr. Aronica pointed out that

the women lost similar amounts of weight and body fat on low-carb and on low-fat despite being significantly less compliant to low-carb than to low-fat.

Which, of course, tells us that those women would have doubtless lost much more on the low-carb diet had they been compliant, just like the men did.

Dr. Aronica points to gender differences in fear of fat as a reason for the lack of compliance to the low-carb diet.  She says that typically men don’t have a problem with steak and other fatty foods, whereas there is

an extensive body of research indicat[ing] that fear of fat is greater in women than in men.

If this is true or not, I don’t know.  I make no claims to have anything but limited knowledge of that research.

What I can say is that I doubt that female readers of this blog have a fear of fat. Or otherwise they probably wouldn’t be here. But these women were recruited for the study from the general population around Stanford and randomized into each of the diet groups. They didn’t self select.

So, if there is a generalized fear of fat among women, then it would be expected that those on the low-carb diet would be less compliant. Especially if coming from the Bay Area where every dish is served with a handful of sprouts.

In the final analysis, data from this study shows the superiority of the low-carb diet as compared to the low-fat diet for weight loss, assuming good compliance to either diet.  If you take a group of men and women with similar compliance, and if they all started with a baseline weight of 100 kg (220 lbs), Dr. Aronica points out that women

(The difference between the men and women when all are considered at the same baseline weight is that for any given weight men generally have a larger muscle mass than women.) 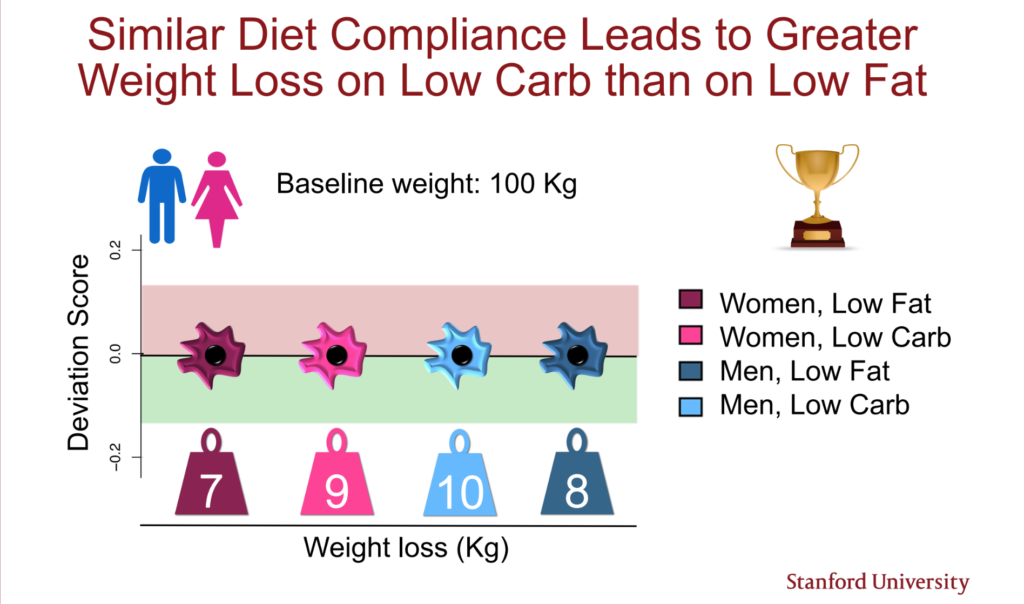 The take home message is that if women are as compliant as men on low-carb diets, that’s the best way for them to lose weight and body fat.

*The word healthy when applied to diet is one of those grammatical things that drives me berserk.  Healthy is a state of being.  You can be healthy;  I can be healthy; your dog can be healthy. But food isn’t healthy; it is healthful. Steak is healthful; junk food isn’t. So  JAMA should be calling these healthful low-carb diets and healthful low-fat diets.  Not healthy.  At least the New York Times put “healthy” in quotes as it applied to the diets, letting those in the know that the editors at The Grey Lady knew better.  I should have done the same, but I put an asterisk instead. I fear I’m fighting a losing battle on this one. I just couldn’t post it the way they wrote it without at least a mention.