If you’ve been following a low-carbohydrate diet for any length of time and have experienced the changes in weight and energy levels, the reductions in blood sugar and blood pressure, and the improvement in GERD that typically accompany such diets, you may wonder why the mainstream doesn’t jump aboard.  I know I did. When I put my patients on low-carb, high-fat (even high saturated fat) diets and saw spectacular results, most of my colleagues kind of blew it off with a ho hum. Even our local paper in Arkansas got into the act and published an article about MD and me with the headline: Are These Doctors Killing People? (Full disclosure: Uh, not a one.)

Well, now comes not just a mainstream doctor, but one of the most mainstream docs of all, saying don’t worry about saturated fat.  How mainstream?  How about the president of the World Heart Federation?  Is that mainstream enough?  Dr. Salim Yusuf is the Marion W. Burke Chair in Cardiovascular Disease at McMaster University Medical School in Hamilton, Ontario, Canada and the lead investigator in the Prospective Urban and Rural Epidemiological  Study (PURE).  If you haven’t seen the short video below, take a look.  It’s been all over the internet, but was taken down, probably because the results Dr. Yusuf presented were not in publication yet.  It is no breach of protocol to present such findings to medical and scientific groups pre-publication, which is the case here, but perhaps that’s why the videos have been removed previously.  This version has been available for about a week, so I’m guessing the powers that be in this situation gave up playing YouTube whack-a-mole.

Before we get all fired up and start thinking the findings in this study actually mean something, let me remind you it is an epidemiological study (also called an observational study) and as such doesn’t mean squat.  I wrote a piece a while back on why observational studies can’t be used to prove causality.  They are pretty much worthless for anything other than establishing hypotheses to be tested using randomized controlled trials (RTCs).

After writing the piece linked to above, I caught some flack from a few people I respect for not painting the complete picture of observational studies.  These folks believe that although observational studies can’t ‘prove’ that A causes B, they can make a serious argument that A doesn’t cause B.  In other words, if I ask 50,000 people to fill out food frequency questionnaires, wait for ten years to see how many have heart attacks, and find that those who did have them ate a little more saturated fat than those who didn’t, I can’t legitimately make the claim that saturated fat causes heart disease.*  But if instead I find that there really isn’t any correlation whatsoever in saturated fat intake and heart disease (or the data show that those who had heart attacks ate less saturated fat), then I can reasonably say saturated fat probably isn’t a cause of heart disease.  I’ve been meaning to go back and make that correction to my post, but haven’t gotten around to it yet.

Now, realizing we can’t determine any kind of causality from this enormous observational study, what conclusions can we draw?  I’ll give the time on the video and tell you what I think we can conclude.

1:40 Increasing fat protects us.  Contrary to the advice from the AHA and other advisory groups, I would say this shows fat doesn’t hurt us.

3:13 No benefits to polyunsaturated fats.  Can’t make the case that PUFA are beneficial despite the AHA and all the other advisory groups touting them for at least 50 years.  (Based not on the PURE study, but my own study of the medical literature, I believe PUFA are seriously harmful.  Especially in the large industrial doses we’ve been force fed over the past 50 years.)

3:22 Changes in oil consumption over the past 30 years.  (See above parenthetical comment for my view.)

4:02 No evidence 1 percent or 2 percent milk is any more healthful than whole milk.  That says it all.

6:08 Carbohydrate intake vs ApoB/ApoA ( a sort of surrogate for triglycerides/HDL) shows carbs worsen the ratio.  Doesn’t really prove anything other than carbs probably aren’t protective.

6:43 Saturated fat intake vs ApoB/ApoA shows the opposite of carb intake.  Means to me that saturated fats aren’t harmful in terms of what they do to lipids.

In his talk, Dr. Yusuf makes the case that red meat is okay in moderation, but he doesn’t really tell us what moderation is.  And, if the truth be known, I doubt he knows.  But what we can derive from his results with the various fats and ApoB/ApoA is that saturated fat tends to the protective, MUFA is protective and PUFA are neutral.  (Again, this kind of study can’t show causality, so I’m talking in terms of what conclusions we can draw, which are that none of these fats is harmful, and if any is protective, it would be the MUFA.)  If you look at the kinds of fats in red meat, you find that beef, for example, contains about 4 percent PUFA, 46 percent saturated fat, and 50 percent MUFA.  So, based on Dr. Yusuf’s date from the PURE study, he should be recommending red meat out the wazoo.

The next third of his talk is on sodium intake and makes the point that we probably need to increase the amount of sodium were consuming.  And that we should change the AHA values as to what is a healthful intake.  He does make a couple of interesting points in addition.

12:34 Stop and think for a minute.  Sodium is an essential nutrient.  So why would we want to restrict it to next to nothing as most cardiologists would have us do.

13:02 The first line of defense against infection in the skin is sodium.  Which is why the largest part of sodium in the body is stored in the subcutaneous (under the skin) fat.

13:50 Why do epidemiologists think you should lower sodium “all the way down to your boots and people will live forever?”   Good question.

13:59 People have used the data from the Yanomami Indians to show that lower sodium intake means lower blood pressure.  Which is true.  But the Yanomami have a life expectancy of 32 years.  And die overwhelmingly from infection.

14:43 Conclusions about sodium.  All the recommendations are way too low.

17:15 Nice rant by Dr. Yusuf.  He makes the point that although his studies show vegetables to be neutral in terms of cardiovascular health, neutral is good.  “If you like it, eat it.”

17:40 He starts on legumes. The PURE study does show a fairly strong protective effect for legume consumption.  Which, of course, means legumes probably aren’t harmful.  But you’ve got to remember that the PURE study was done across a number of countries and a vast array of socioeconomic groups and the data were pooled.  Legumes are doubtless the major protein source for many of the groups studied, and since protein is an essential nutrient, it stands to reason that getting enough of it – even if from legumes only – is a good thing.  In terms of a low-carb diet, the problem with legumes is that they come with too much carbohydrate.  I suspect that if you’re getting enough protein from meat, legumes won’t add much to your health.  Of course, that’s my speculation based on my own reasoning and not on the PURE data.

19:30 Shows that in low-income countries, the cost of 2 servings of fruits and 3 servings of vegetables per day represents from 30 percent to 60 percent of their income.  And even when they grow these foods themselves, they don’t eat them – they sell them as a cash crop.

20:15 Dr. Yusuf’s conclusions.  This is where he really goes on a rant and over-interprets his data.  But at least he over-interprets in a good way.  If you don’t watch anything else, watch this last couple of minutes. 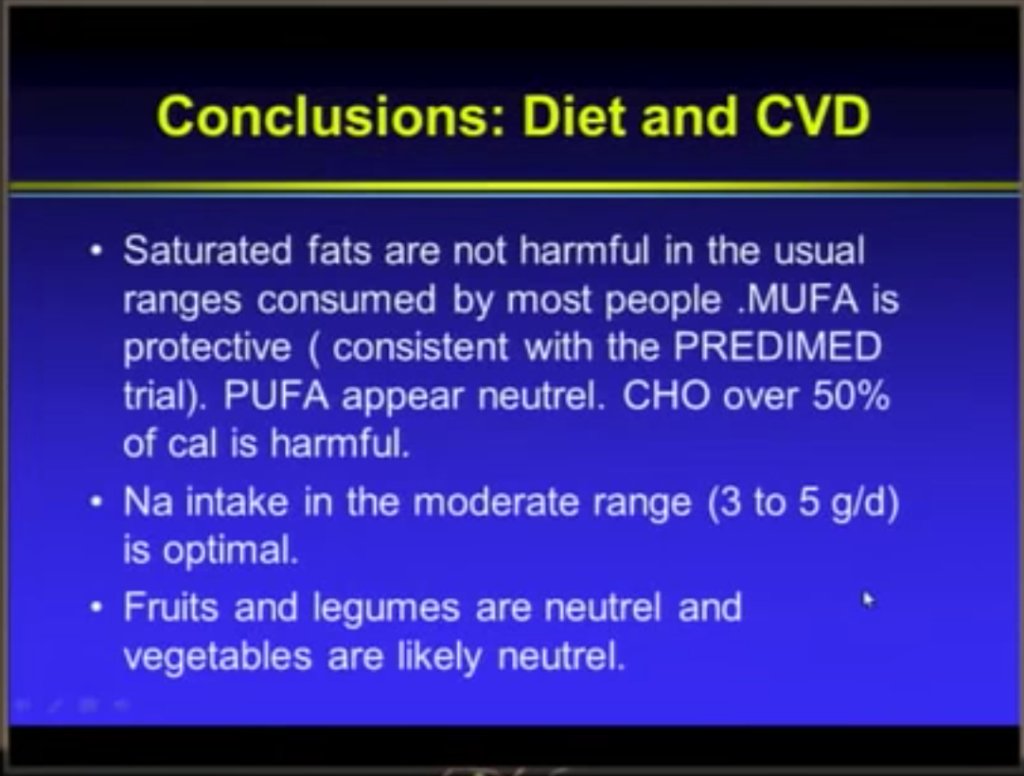 He starts right off saying that recommendations to restrict saturated fat have no scientific basis.  Then he turns for confirmation to Nina Teicholz’s book The Big Fat Surprise, (you really need to read this book if you haven’t already; here is my review) which he says has shaken up the nutrition world.  He seems stunned to have learned that the foundation for the lipid hypothesis for fifty years, the data for The Seven Country Study by Ancel Keys, had been cherry picked.  Funny because low-carbers have known that for years.  Note: As Dr. Zoë Harcombe pointed out to me, there is a general misunderstanding between the actual Keys study Seven Countries and his six countries graph.  It is the latter that Dr. Yusuf is actually referring to when he mistakenly calls it the former. Note #2: Dr. Yusuf subsequently apologized for the error.

Now those of you who have been around for a while should know that when someone with Dr. Yusuf’s status in the world of cardiology says something as mutinously radical as saturated fats are not dangerous, the long knives will come out.  And they have.  All the usual suspects are gnashing their collective teeth over Dr. Yusuf’s perfidy.  David Katz, chief nutrition expert from Yale, called the report “bizarre” and “misguided.”  Plant-based dietary proponent Joel Kahn piled on along with Marion Nestle and Yoni Freedhof, the guy who posted the now-famous video of Kevin Hall.  Had these folks not been so paranoid and so intellectually blinkered, they could have sniffed this off as simply an observational study and therefore meaningless in terms of causation.  But they didn’t.  Instead they turned on one of their own and savaged poor Dr. Yusuf.