Have you ever watched a movie that had a surprise ending, say, The Sixth Sense, for example, then watched it again? Once you know the ending, you see all kinds of things that make the ending obvious that you didn’t see the first time through. When you have a movie (or a novelistic) experience like this, it makes you appreciate the talent of the creative people who make the movie (or write the novel). If these folks had just sprung the surprise ending on you without cleverly concealing all the clues, you would feel cheated.

It’s kind of the same with scientific research. Researchers uncover scientific knowledge bit by painstaking bit–sometimes over years–until a piece of the scientific puzzle is clarified. Once this piece is known, you can roam back through the scientific literature and find all the papers that lead to its clarification. Just as you would feel cheated if you watched The Sixth Sense a second time and didn’t see all the evidence of what was going on (which is really obvious once you know the ending) and were just slapped in the face with the surprise ending, you should find something amiss if practically the entire scientific establishment touts something as a fact and you can’t go back and find the evidence that leads to this conclusion.

Let’s start early on with some of the first evidence that came before even Ancel Keys published his discredited Seven Countries Study that kicked off the whole low-fat debacle. Let’s look at data from the venerable Framingham study that was so inconclusive that it wasn’t even published in a peer-reviewed journal.

The objective of the Framingham Heart Study was to identify the common factors or characteristics that contribute to CVD by following its development over a long period of time in a large group of participants who had not yet developed overt symptoms of CVD or suffered a heart attack or stroke.

A large number of residents of Framingham were recruited into this longitudinal study that is still going on today. There are children (and probably grandchildren) of the original Framingham participants enrolled in the study currently. Researchers are monitoring diet, medication history, and a host of other parameters, and have generated God only knows how many papers using this data that has been collected over the past almost 60 years.

One of the first ideas that the researchers had was to look at how diet related to cholesterol levels and how diet related to the development of heart disease. I’ll give you the surprise ending right up front: there wasn’t any correlation. What’s interesting about this part of the study, however, is that the researchers didn’t publish it at the conclusion of the study, so it never really saw the light of day. You’ve probably heard the old saying that doctors bury their mistakes. Well, researchers often bury outcomes they don’t expect and don’t welcome.

In the case of this part of the Framingham study, ten years after the work was completed a statistician gathered the data and put it into typewritten form with a blue binding and disseminated it to the academic community under the name of the then director of the project Dr. Willam Kannel. As the statistician, Tavia Gordan, put it in the editorial note at the beginning

This report is based on a selection from a large body of tabular material prepared since the completion of data collection for the Framingham Diet Study. Unfortunately, these data were never incorporated into a definitive report by the original investigators and a large amount of very careful and thoughtful work has lain unused in the Framingham files. [my italics]

Once I learned of the existence of this report, I got hot on its trail. 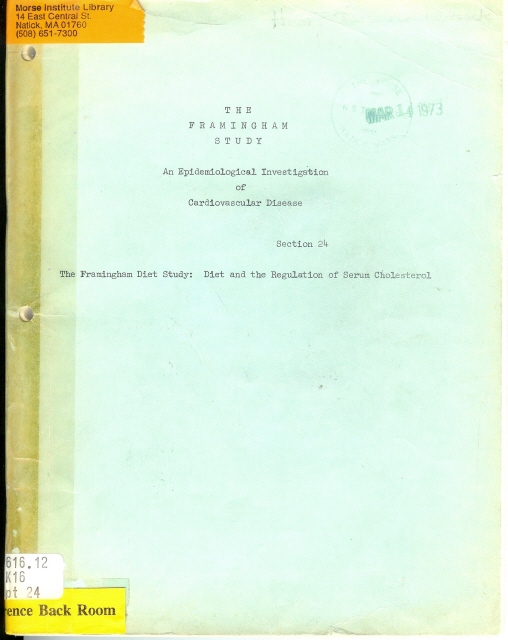 I found the beaten up copy shown on the left through the Internet. It set me back a little over $80. When I got my hands on it, I was at first a little disappointed because I had expected a lot more information for my 80+ bucks than it looked like I was holding in my hands. Then I flipped through it and struck gold inside the back cover. Before we get to that, however, let’s look at what this report shows.

The dietary studies were performed using a couple of techniques described here and here (both are large PDF files). Basically, researchers interviewed the subjects multiple times over the study period using a fairly complex Food Frequency Questionnaire (FFQ). (From a previous post you should know that I’m not a big fan of FFQs, but in this case with the kind of attention to detail the interviewers used, the FFQ has some value.

What did they find?

calories per day showed a slight negative association with serum cholesterol (over all age groups) in men but no association in women.

In other words the more calories the men consumed, the lower were their serum cholesterol levels. Obviously, this wasn’t what the researchers expected to find.

This finding is somewhat puzzling and it is reasonable to inquire if this is related in some way to the level of physical activity.

Typical research thinking: if we don’t get the data that is consistent with our hypothesis, we must have overlooked something. It seems that the idea that maybe the hypothesis is wrong never crosses their minds.

In this case, they were banking on the idea that perhaps those subjects who ate more may have been more physically active and thus have lower cholesterol levels than those who ate less but were sedentary. After fiddling around with the different levels of activity of the subjects, the data fesses up:

Men in the same physical activity class tend to have higher serum cholesterol levels at lower caloric intake. This finding is contrary to expectation. [I’ll bet it was.]

In other words, even after correcting for differing levels of physical activity, the correlation remains the same: those subjects with lower caloric intake tended to have higher levels of cholesterol and vice versa.

What about fat intake?

There was a trivial negative correlation between daily protein intake (in grams) and serum cholesterol level.

The researchers weren’t going to give up easily.

The failure to turn up any positive association between food intake and serum cholesterol level in the Framingham Diet Study led to the exploration of a large number of variant analyses. [In other words, maybe if we torture the data unmercifully, it will confess to anything. Alas, for them, this wasn’t the case.] These were uniformly unsuccessful in finding expected relationships. Only a fraction of these explorations are included in this report.

When it comes to diet and coronary heart disease, nothing changes.

In the period between the taking of the diet interviews and the end of the 16-year follow-up, 47 cases of de novo CHD developed in the Diet Study group. The means for all the diet variables measured were practically the same for these cases as for the original cohort at risk. There is, in short, no suggestion of any relation between diet and the subsequent development of CHD in the study group…

With one exception there was no discernible association between reported diet intake and serum cholesterol level in the Framingham Diet Study Group. The one exception was a weak negative association between caloric intake and serum cholesterol level in men. [As to] coronary heart disease–was it related prospectively to diet. No relationship was found.

So, I would say that the results of this study were pretty clear. These guys tried as hard as they could to show a correlation between diet and serum cholesterol and between diet and the incidence of coronary heart disease, but failed. The data conclusively demonstrated no such correlations.

What did they do with their data?  They certainly didn’t publish it in any scientific journals, though just about any journal in print would have accepted a paper from them.  No, they couldn’t let these results get out, so they basically threw them in a desk drawer.  Years later, Tavia Gordan, the statistician for the study, thought these findings should see the light of day, so he pushed through the private publication of a handful of copies of a monograph to be distributed privately.

Imagine my surprise when I discovered the yellowed news clipping shown below taped into the back of my $80 booklet. This clipping, from the Framingham newspaper dated October 30, 1970, is worth the $80 all by itself. Apparently, despite all the supporting evidence, Dr. Kannel, the director of the study and the guy listed as lead author, wasn’t buying into all this nonsense about there being no correlation. He felt the need to ‘clarify’ the already crystal clear findings.  Even though the information in this monograph wasn’t widely distributed, Kannel wanted to make sure no one might draw the wrong conclusion from his data.

Although there is no discernible relationship between reported diet intake and serum cholesterol levels in the Framingham Diet Study group, “it is incorrect to interpret this finding to mean that diet has no connection with blood cholesterol,” Dr. William B. Kannel, director of the Framingham Heart Study has stated.

Hmmm, I guess Dr. Kannel didn’t enjoy the surprise ending of that movie, so decided to change it on the fly. I think the rest of this remarkable clipping is legible, so read it and laugh. It’s a grand example of what I’ve written about before: scientists who present their conclusions one way in a scientific paper that other scientists will look at and call them on if they are incorrect and a totally different way to the press that reports to the population at large.

(Click on the image to enlarge if you have trouble reading it.) 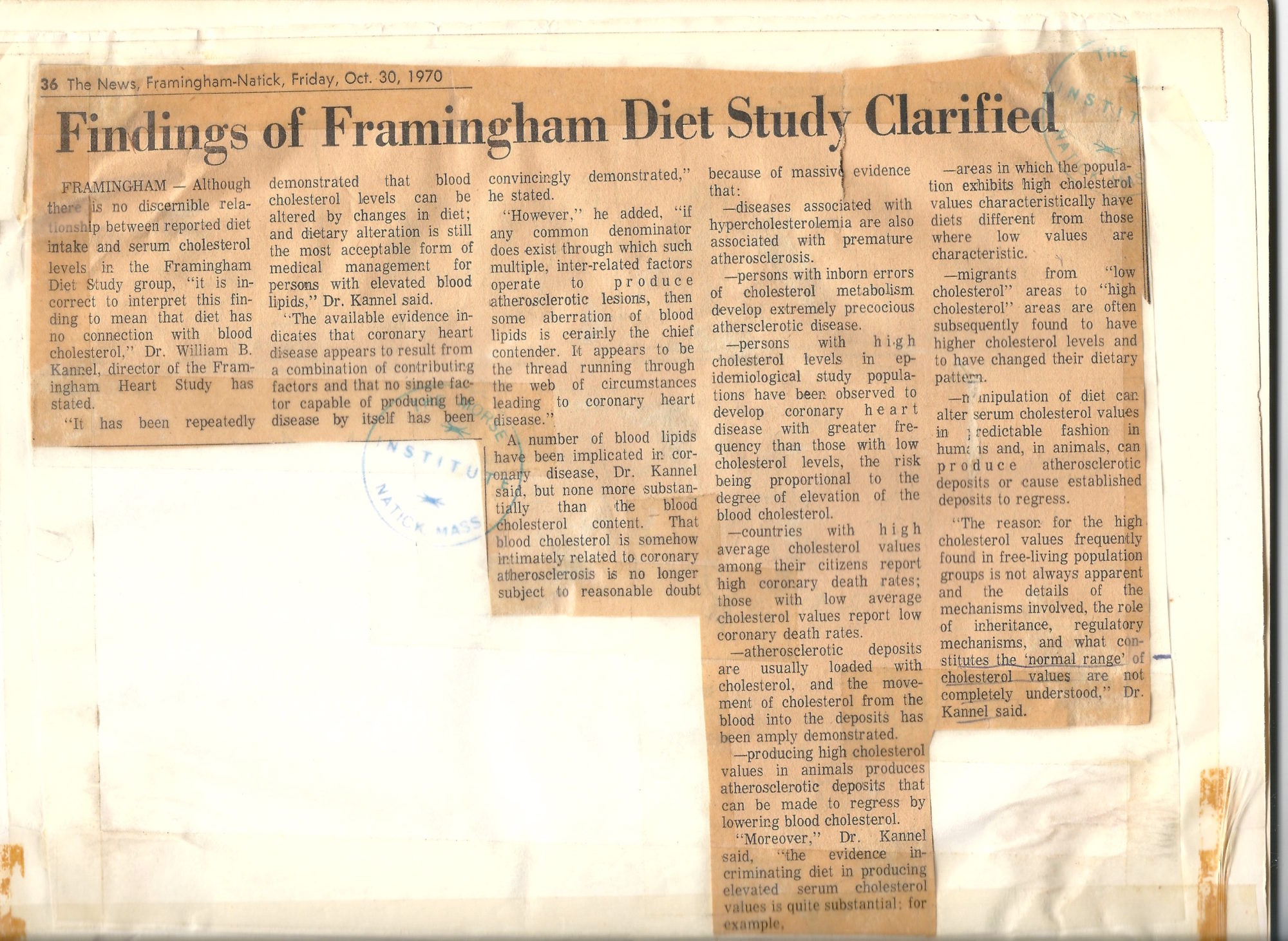